When I saw the Crafting Forever stamp set in the 2017-2018 Annual Catalog, I was immediately drawn to two of the stamp images:  the set of three pens and the container of paintbrushes.  This is because these images evoke strong memories of my parents and their respective creative talents.  The pens image reminds me of the custom pens my father created using his lathe and the container of paintbrushes reminds me of the wide variety of painting that my mother accomplished throughout her life.

My father used many different types of substances to craft pens on the lathe.  He also turned bowls, made finials for Christmas ornaments, made salt and pepper grinders, and bottle stoppers.  In addition, he was a skilled furniture craftsman and woodworker.  My parent's home, my home, and the homes of all of my brothers and sisters (there are 6 of us) contain ample evidence of his skill.  On days when I'm missing my father intensely, it's a comfort to see his work around me, remember him at work in his workshop, and hear his voice in my heart. 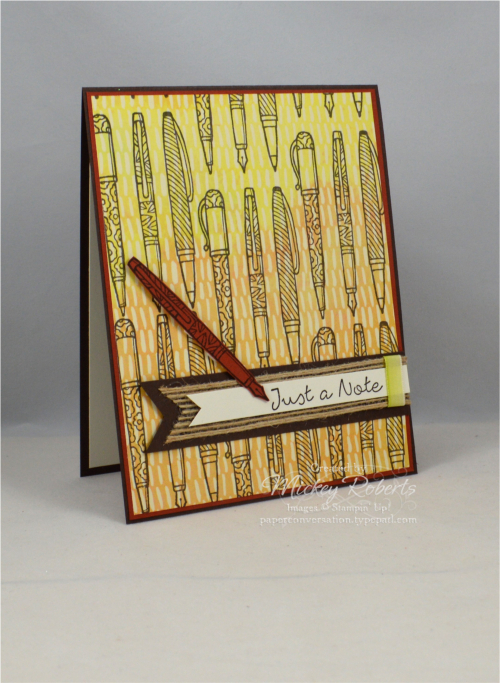 Stamp the pens image on Cajun Craze cardstock using Early Espresso ink.  Using Paper Snips, cut the pens from the cardstock.  Adhere the fountain pen (has the pointed tip with the slit at the tip) to the card front so that the tip of the pen points to the "J" in "Just" and the body of the pen adhered to the card front using Mini Stampin' Dimensionals.  The remaining two pens are used for the inside sentiment area of the card. 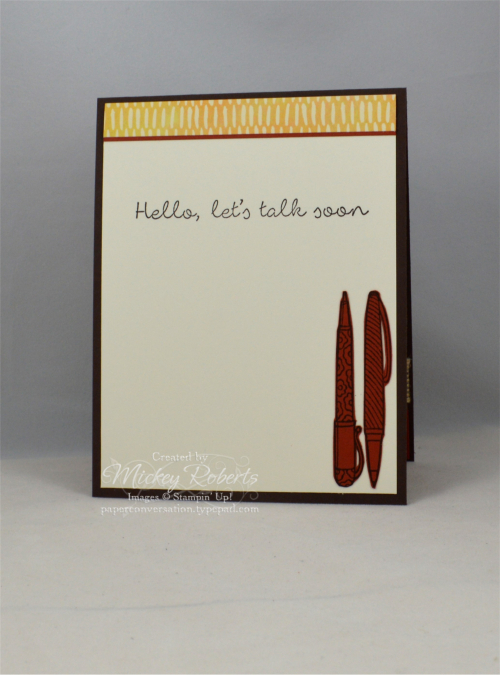 The inside sentiment area of the card was lined with a piece of Very Vanilla cardstock.  A thin strip of Cajun Craze cardstock was adhered behind the bottom edge of a strip of Painted Autumn Designer Series Paper.  This strip was adhered along the top edge of the liner.  The "Hello, let's talk soon" sentiment, from the Better Together stamp set, was stamped near the upper center of the liner using Early Espresso ink.  The remaining two pens cut out from the Cajun Craze cardstock were adhered vertically at the lower right corner of the liner.  (Note that the area between the pocket clip and pen body for each pen was removed using an X-Acto Knife.) 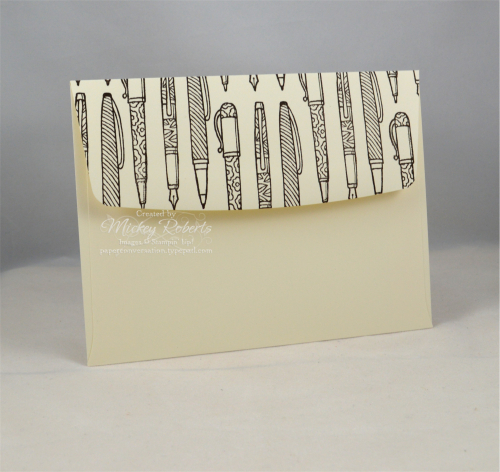 Here in Florida we are anxiously watching Hurricane Irma, preparing for the worst, and hoping for the best.  Living along the East Coast of Florida means that this is a part of life for us.  It doesn't make it any easier to deal with when the time comes, it just means that we prepare accordingly.  So now it's time to get back to the preparing.

Supplies I used to make this card -- Super fun cards. I love your detailed descriptions. Thanks for sharing all the cuts and how to's.

Finally found a great article about the usage and importance of custom pens.