Party With Cake -- It's Your Day

It's a gloomy Sunday afternoon...overcast and with a light chill.  My daughter and granddaughter are headed home, my husband is headed to the 3 Par for a while, and I'm feeling a little blue.  It's always that way right after all the fun is over and you are heading back to reality.  The good news is that the doggies are settling down for their afternoon naps next to my feet, my work room is cozy, and I'm writing to you--a nice pick-me-up, for sure!

Today's post is a card I designed for my January Stamp Clubs.  This card features the Party With Cake stamp set, Confetti Textured Impressions embossing folder for the Big Shot, and It's My Party Designer Series Paper Stack.  All the same stuff I used for the projects I designed for the Stampin' Addicts Occasions Catalog Blog Hop last weekend. 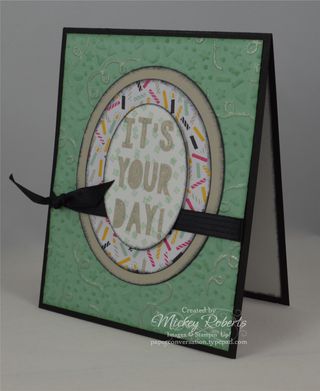 This card begins with a Basic Black card base.  I don't use Basic Black often for card bases because I tend to like the lighter, brighter colors, but I wanted to make this a more masculine looking card.  I had already picked out a design from the It's My Party Designer Series Paper Stack and wanted to stay with the colors in the paper.  The Melon Mambo and Crushed Curry were just not doing it for me and the Sahara Sand was a little too tame.  Also, I was looking for a way to include the Basic Black 3/8" Stitched Satin ribbon.  So, Basic Black for the card base.

A piece of Mint Macaron cardstock was embossed with the Big Shot using the Confetti Textured Impressions embossing folder.  The edges of the cardstock were sponged with Mint Macaron ink and the inked sponged rubbed lightly over the raised embossing.  Then I brushed Wink of Stella Clear ink over the embossed streamers to add some subtle sparkle to the embossing.  Since there's a blank oval in the middle of the embossed area, I decided to use the Ovals Collection Framelits for the Big Shot to die cut two ovals of Sahara Sand and a slightly smaller oval of the Designer Series Paper.  The edges of these ovals were sponged with Memento Tuxedo Black ink, adhered together with the smaller oval centered on top of the larger oval, and then adhered over the oval on the embossed cardstock.  A piece of Basic Black 3/8" Stitched Satin ribbon was wrapped around the embossed cardstock and knotted at the left side.  Then the embossed cardstock was adhered at the center of the Basic Black card front.

The greeting, from the Party With Cake stamp set, was stamped on a piece of Whisper White cardstock using Sahara Sand ink.  The confetti image was inked with Mint Macaron ink, stamped off on a scrap of paper and then stamped on the Whisper White cardstock to cover the lettering.  The greeting was die cut with the Big Shot using a die from the Ovals Collection Framelits and the edges of the die cut sponged with Memento Tuxedo Black ink.  The greeting was adhered at the center of the oval die cut from Designer Series Paper using Stampin' Dimensionals.  Finally, Wink of Stella Clear ink was brushed on top of each letter to add some sparkle there, too. 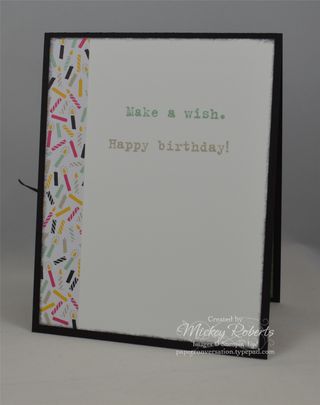 The inside sentiment area of the card was lined with a piece of Whisper White cardstock with a strip of the Designer Series Paper adhered along the left edge of the liner.  The edges of the liner were sponged with Memento Tuxedo Black ink.  The "Make a wish." sentiment was stamped near the upper center using Mint Macaron ink and the "Happy birthday!" sentiment was stamped below the first using Sahara Sand ink. 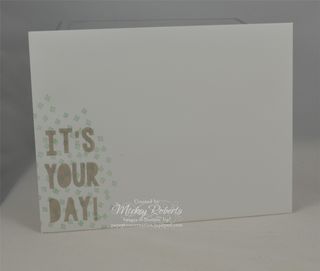 The greeting was stamped at the lower left front corner of the Medium Whisper White Envelope using Sahara Sand ink.  Like the greeting on the card front, the confetti image was inked with Mint Macaron ink, stamped off on a scrap of paper, and stamped over the lettering of the greeting.  Then Wink of Stella Clear ink was brushed over each letter to make them sparkle.

I really like the simplicity of this card and how the Wink of Stella Clear ink adds just the right touch of shine to balance out the shine of the ribbon.  Also, when the card was finished, I realized that it really isn't a card just for guys.  It's appropriate for guys or gals; especially those celebrating those milestone birthdays that folks want to drape a bunch of black over (a.k.a. "Over the Hill" events).  My husband has one coming up in just a couple of months...