Party With Cake -- It's Time to Celebrate With Cake

It's a rainy day here in East Central Florida.  Winter is usually our dry season, but this year we've had buckets and buckets of rain.  So since I'm not going out to run errands, I can focus on the fun stuff--like writing a blog post while washing all the old towels and sheets used to protect all the tropical plants during last weekend's near freeze.

The bulk of my card making efforts tends to center around making birthday cards.  I'm from a large family and as my brothers and sisters and I have aged and our families have expanded, the number of cards to be sent each year has grown substantially.  In the last few years, however, I've become delinquent in actually sending the cards.  We won't get into the guilt associated with that...

Today's post is a continuation of how-to's for last weekend's blog hop projects.  I'll warn you up front that this birthday card took a bit of time to create but I think the end result is more than worth the effort.  I was pretty darn tickled with how it turned out! 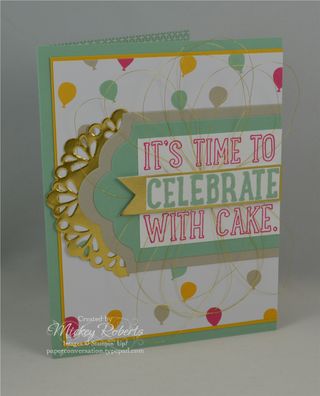 The focal point for the card front begins with a piece of Sahara Sand cardstock die cut with the Big Shot using the largest of the Lots of Labels Framelits.  A piece of Mint Macaron cardstock was die cut with the Big Shot using the second largest of the Lots of Labels Framelits.  The Mint Macaron die cut was adhered at the center of the Sahara Sand die cut.  The largest size of Gold Metallic Foil Doilies was adhered behind the left end of the Sahara Sand die cut.  (Rather than have all of the doily behind the die cut, I marked the doily where it would disappear behind the die cut and trimmed that part away to save for future use.)  The die cuts and doily were placed on the card front with the top edge of the Sahara Sand die cut approximately 1" below the top edge of the Crushed Curry mat.  Note that some of the right side of the die cuts will extend over the right edge of the card front.  That's OK.  Just mark the edges of the card front on the die cuts with a pencil and trim off the excess with your paper cutter (you'll need something a little more substantial than the Stampin' Trimmer to cut through two layers of cardstock; like a guillotine cutter or craft knife and ruler).  Once the excess is trimmed, adhere the focal point to the card front.

The "Celebrate" was cut from the Mint Macaron greeting using Paper Snips and matted with a piece of Gold Foil Sheets so that there is about a 1/16" mat around the right, top, and bottom edges of the Whisper White "Celebrate".  A banner tail was created at the left side of the Gold Foil strip using Paper Snips and the banner was adhered over the Melon Mambo "Celebrate" using Stampin' Dimensionals.  Note that the right edge of the banner is flush with the right edge of the card front. 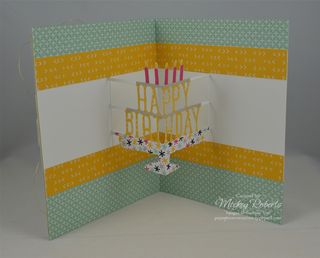 Now this is where the card gets fun!

To finish the inside of the card, adhere strips paper from the It's My Party Designer Series Paper Stack to the top and bottom edges of the Whisper White die cut and, if you choose, to the card base above and below the edges of the die cut.  A piece of Whisper White cardstock was cut to 3-11/16" x 2" and scored at 1-7/8" along the 3-11/16" length.  This piece was adhered underneath the pop-up to make the "Happy Birthday" stand out a little better.  Adhere one side first with Tombow Multi and then the other making sure that the right and left edges do not interfere with the pop-up.

At this point, it's kind of anti-climactic, but here's the envelope. 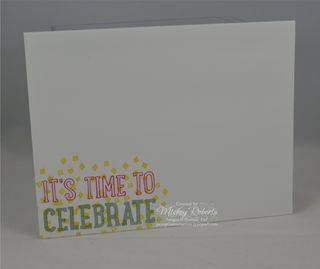 The "It's Time To Celebrate With Cake" stamp was inked with the brush tips of Melon Mambo and Mint Macaron Stampin' Write Markers as shown and stamped at the lower left front corner of the Medium Whisper White Envelope.  The confetti stamp was inked with Crushed Curry ink, stamped off on a piece of scrap paper and then stamped on the envelope over the lettering.

Once you've completed this card, you'll be thinking long and hard about who may be worthy enough to actually receive it.  If you plan to mail it, be prepared to put on some extra postage as the completed card in the envelope will be thicker than the 1/4" allowed for the postal sorting machines.  Besides, after all this work, you certainly want this one hand cancelled.