I hope you found time to hop through the Stampin' Addicts Occasions Catalog Blog Hop last weekend.  If you missed it, you may want to take time to see how some talented designers showcased some of their favorite stamp sets from this new catalog.  You can start the hop with this post and just click on the next or previous buttons to work your way through the hop.  I think you'll be very inspired!

The stamp set I featured during the hop was the Party With Cake stamp set.  I also included the coordinating Party Pop-Up Thinlits for the Big Shot with two of the projects.  The great news is that the Party With Cake stamp set and Party Pop-Up Thinlits are available as a bundle for 15% savings.  If you purchase the bundle and add the Confetti Textured Impressions embossing folder, also used for this project, you'll qualify for a FREE Sale-A-Bration item!  That's a pretty terrific deal!

This week I'll be featuring each of the projects I designed for the blog hop to give you a little more information about how each was created.

We'll start with some glimmer and shine; because those are my favorite kinds of birthday cards! 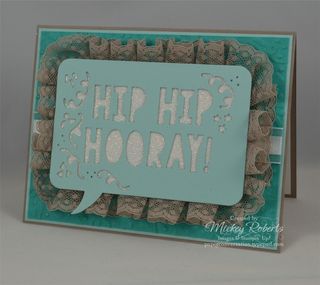 A piece of Pool Party cardstock was die cut with the Big Shot using the "Hip Hip Hooray!" thinlit from the Party Pop-Up Thinlits.  Because this die cut was being used for a focal point rather than a pop-up, I used an X-Acto Knife to cut along the score line on the right and left edges of the word bubble to separate the "Hip Hip Hooray!" from the pop-up function.  A piece of Dazzling Diamonds Glimmer Paper was adhered behind the die cut using Mini Glue Dots.  The focal point was placed face down on the work surface and Tear & Tape adhesive was placed along the back edges of the glimmer paper.  Working with one side at a time, Tip Top Taupe 1" Dotted Lace Trim was finger pleated along the Tear & Tape adhesive.  (When making the turns at the corners, I used Scotch Tape to hold the lace in place.)  Once all the sides were pleated, Stampin' Dimensionals were stacked two high at each corner just beyond the upper edge of the lace.  Then the focal point was adhered at the center of the card front. 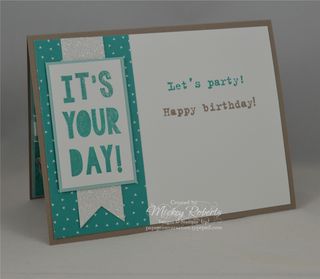 The inside sentiment area of the card was lined with a piece of Whisper White cardstock.  A strip of Bermuda Bay confetti print paper from the Cherry on Top Designer Series Paper Stack was adhered along the left edge of the liner.  A banner of Dazzling Diamonds was adhered at the center of the paper strip to anchor a glittery birthday message.  The "It's Your Day!" image was stamped on a piece of Whisper White cardstock using Bermuda Bay ink.  The Whisper White cardstock was matted with a slightly larger piece of Pool Party cardstock and adhered over the banner and paper strip using Mini Glue Dots.  Wink of Stella Clear ink was brushed over the letters of "It's Your Day!" 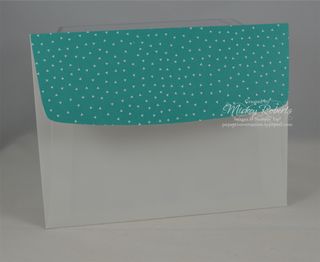 A piece of the Bermuda Bay confetti print paper was adhered to the envelope flap of the Medium Whisper White envelope with the excess edges of the paper trimmed along the edges of the flap using Paper Snips. 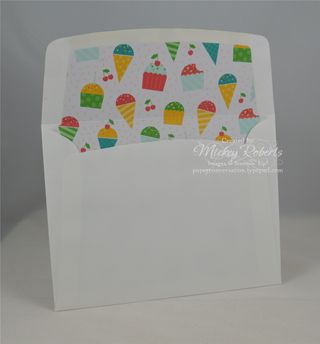 I'll be back soon with another project created using the Party With Cake stamp set.