I was cleaning off my work table to begin cutting paper for this weekend's Christmas card class when I came across a leftover gift bag tag (you can see that project here).  Since I had used up all the large pieces of the coordinating Home for Christmas Designer Series Paper for this tag I couldn't make another gift bag, so I dug through the scraps to figure out what to do with this lonely tag.  Fortunately, I found enough pieces of the paper to make a card.  AND since this week's theme for the Global Design Project is Christmas, I realized I had stumbled onto a serendipitous moment -- might as well take advantage of it!  So here's the card. 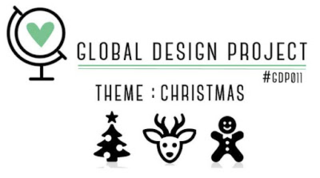 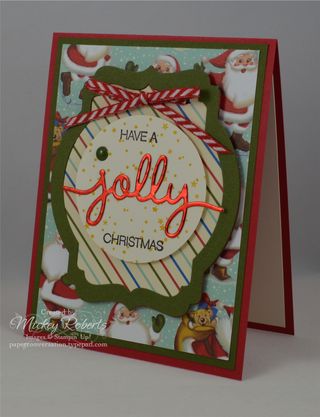 Two holes were punched near the top edge of the tag using the Crop-A-Dile 1/8" hole punch (too many layers for the 1/8" handheld circle punch) and a length of Real Red 1/8" Striped ribbon was threaded through the holes and tied in a bow.  The tag was adhered to the card front using Stampin' Dimensionals.

A piece of Very Vanilla cardstock was punched with the 2-1/2" circle punch and covered with the stars image from the Holly Jolly Greetings stamp set using Crushed Curry ink.  The sentiments "Have a" and "Christmas" (also from the Holly Jolly Greetings stamp set) were stamped at the top and bottom edges of the circle, respectively, using Early Espresso ink.  The "jolly" sentiment was die cut from Red Foil Sheets with the Big Shot using the Christmas Greetings Thinlits and adhered across the center of the circle using the Fine Tip Glue Pen.  A small Mossy Meadow dot from the Home for Christmas Enamel Dots was used to dot the "j".  The circle was adhered at the center of the tag using Stampin' Dimensionals. 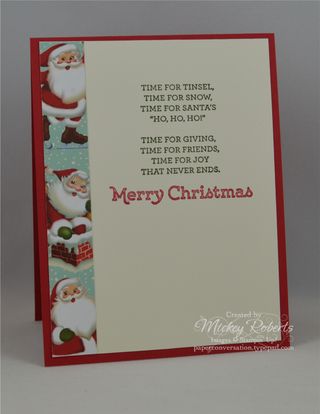 The inside sentiment area of the card was lined with a piece of Very Vanilla cardstock.  A strip of the Santas paper was adhered along the left side of the liner.  Christmas greetings from the Versatile Christmas stamp set were stamped near the upper center of the liner using Mossy Meadow and Real Red inks. 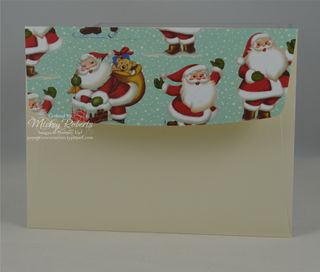 The flap of a Medium Very Vanilla envelope was covered with a piece of the Santas paper and trimmed along the edges of the envelop flap using Paper Snips.  And that pretty much used up all the remaining pieces of the Santa paper!

Thanks for stopping by to visit!

Mickey - this paper makes me smile every time I see it. I love how you've used it so many times in your fun, festive card and envelope. Such a great project! Thank you so much for playing along with this week's Christmas Theme Challenge at the Global Design Project.

It would have been a shame to throw away a perfectly good tag. Your lovely card was the perfect solution to showcase the little masterpiece! Thanks so much for playing at Global Design Project this week.

Love this vintage Christmas look. Thanks for sharing with Global Design Project.