I mentioned previously that I've begun including a project featured in the Stampin' Up! Catalogs for my stamp clubs.  This helps my papercrafters to discover that the beautiful projects in the catalogs are designed to be easily reproducible.  In September, we made this cute project found on page 188 of the 2012-2013 Stampin' Up! Catalog.  I changed the colors for my project, but otherwise it's essentially the same card. 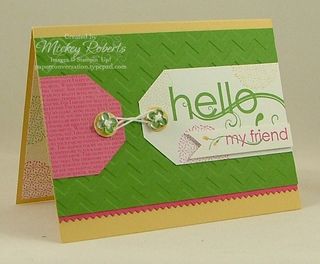 This card begins with a card base of So Saffron cardstock.  A piece of Gumball Green cardstock was embossed with the Chevron Textured Impressions embossing folder and the Big Shot.  One edge of a strip of Melon Mambo cardstock was die cut in the Big Shot using the Pinking Shears edge from the Finishing Touches Edgelits.  The die cut strip was adhered behind the bottom edge of the Gumball Green panel and then the panel was adhered to the card front.

A piece of Whisper White cardstock was cut into a tag using the same process used for the Melon Mambo paper tag.  (See diagram below for Whisper White tag.)

Two circles were punched from So Saffron cardstock using the 1/2" circle punch.  One of the circles was pierced at the center using the Paper Piercing Tool and threaded with Whisper White Baker's Twine.  One end of the Baker's Twine was adhered to the back of the circle using a Mini Glue Dot with the remainder of the twine hanging down from the front of the circle.  The circle was adhered near the right end of the Melon Mambo tag using a Mini Glue Dot.  The second circle was adhered near the left end of the Whisper White tag using a Mini Glue Dot.  Two four petal flower Bitty Buttons were threaded with Whisper White Baker's Twine and knotted on the top of the button.  The four petal flower punch from the Itty Bitty Shapes Punch Pack was used to punch two flowers from Gumball Green cardstock.  The buttons were adhered to the cardstock using Crystal Effects.  Once the Crystal Effects dried, the buttons were adhered to the center of the So Saffron circles using Mini Glue Dots.  The Baker's Twine was looped twice around the buttons in a figure 8 manner.  The excess twine was cut near one of the buttons with the end tucked under the button between the Gumball Green and So Saffron cardstocks. 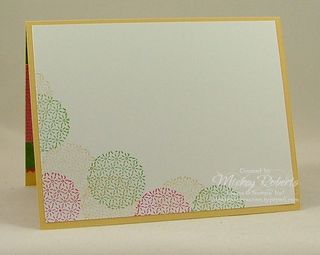 The inside sentiment area of the card was lined with a piece of Whisper White cardstock.  The circle of stars image was randomly stamped along the left and bottom edges of the cardstock using Gumball Green, Melon Mambo, and So Saffron inks. 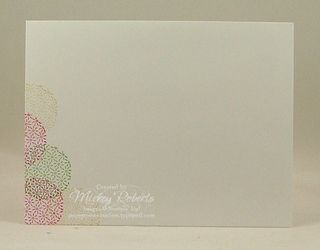 The same process was used for the lower left front corner of the Medium Whisper White Envelope.

This card was a big hit with my stamp clubs.  They liked the bright colors and fun feel the card evokes.  If you're looking for ideas, the Stampin' Up! Catalogs are definitely a great creative source.  Don't have a Stampin' Up! Catalog?  Contact me and we'll get you fixed up!

Gorgeous card!! I don't remember seeing it in the catalog at all -- now I have to go look! I love the colors you used, they are so bright and fun!