Be of Good Cheer

When you're thinking of Christmas cards, especially when you are making a bunch of them, you want to create a card that reflects your personal style and your joy of the Season.  When I finished making this card, I was so tickled.  This card is IT! 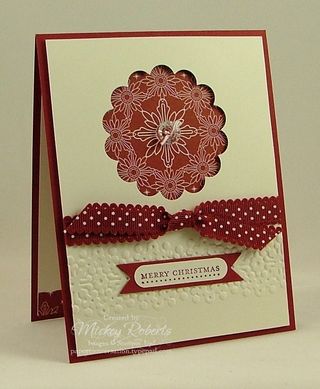 This card begins with a card base of Cherry Cobbler.  A panel of Very Vanilla cardstock was punched with the 2 3/8" Scallop Circle punch near the upper center of the panel.  The panel was embossed with the Big Shot using the Delicate Designs Textured Impressions embossing folder; placing the folder across the panel so that the bottom edge of the embossing is approximately 1" above the bottom edge of the panel.  [I chose this embossing folder because the embossing looked like snowflakes to me and worked with the "snowflake" pattern of the Designer Series Paper that I used.]  A piece of Cherry Cobbler 1/2" Scallop Dots ribbon was wrapped around the panel and knotted on the front just above the embossing.

Stampin' Dimensionals were placed at the very outside point of the corners of a 2 1/2" square of Be of Good Cheer Designer Series Paper.  The paper square was placed behind the punched scallop circle, centered inside the punched area, and the corners pressed onto the back of the Very Vanilla cardstock.  [Note that the pattern you see behind the punched circle occurs 16 times on a single piece of the Designer Series Paper.  That means that you could make 32 of these cards using just those two sheets from the Be of Good Cheer Designer Series Paper package.]  More Stampin' Dimensionals were placed on the back of the Very Vanilla panel and then the panel was adhered, centered, to the card front.  A Cherry Cobbler banner was die cut using the Bitty Banners Framelits and the Big Shot.  The "Merry Christmas" sentiment, from the Teeny Tiny Wishes stamp set, was stamped on a piece of Very Vanilla cardstock using Cherry Cobbler ink, punched out with the Word Window punch, and adhered at the center of the banner.  The banner was adhered across the center of the embossing using SNAIL.  A piece of Cherry Cobbler/Whisper White Baker's Twine was threaded through the buttonholes of a small Vintage Faceted Designer Button and knotted.  The button was adhered at the center of the Designer Series Paper using a Mini Glue Dot. 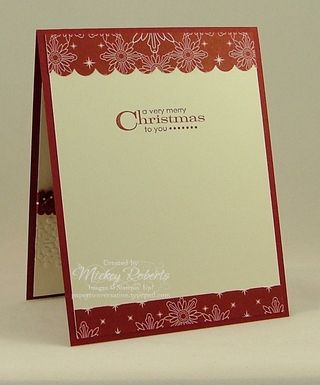 The inside sentiment area of the card was lined with a piece of Very Vanilla cardstock.  Strips of Be of Good Cheer Designer Series Paper were adhered along the top and bottom edges of the liner.  The bottom edge of the top strip was punched with the Scallop Edge Border punch.  A sentiment from the More Merry Messages stamp set was stamped near the upper center of the liner using Cherry Cobbler ink. 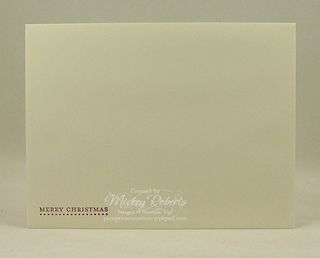 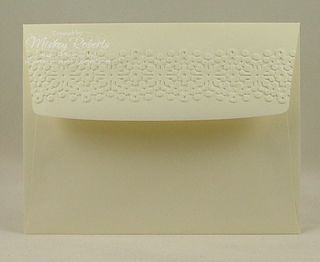 The "Merry Christmas" sentiment was stamped at the lower left front corner of the Medium Very Vanilla Envelope using Cherry Cobbler ink.  The envelope flap was embossed in the Big Shot with the Delicate Designs Textured Impressions embossing folder.  The flap was inserted into the folder with the top of the folder at the fold of the flap. The flap was folded down onto the back of the envelope (as if the envelope were closed) and placed between the Standard Cutting Plates on the Multi-Purpose Platform.

When I was making this card front for a Convention swap, I miscalculated the amount of Cherry Cobbler 1/2" Scallop Dots ribbon I would need.  Since I already had the five remaining panels punched and embossed, I wanted to take them with me.  I began looking through my stash of ribbons to decide what I could use.  I looked at the Cherry Cobbler Seam Binding ribbon but it seemed too dark.  And I thought about dying some Whisper White 3/8" Taffeta ribbon with the Cherry Cobbler reinker but really didn't want to take the time to do that.  So I began cleaning up my work surface while I thought some more and ran across the Cherry Cobbler/Whisper White Baker's Twine that I had used for the button.  Voila! 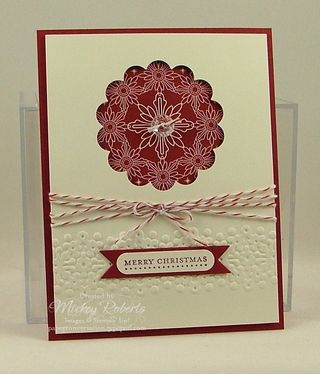 I just LOVE when it all comes together!

Gorgeous card! I love the textures! It looks great with both the ribbon and the Baker's Twine. Just lovely!

Very cute! I love it. Great job! It looks like I got another CASE :-) thanks for sharing.
Jeannette

What great use of the dsp!

beautiful and elegant card.I love how the snowflake dsp is peeking through the scalloped circle. the details of the card are awesome!!
txjennywren.blogspot.com

Beeeooootiful! The envelope is nearly as pretty as the card! And I LOVE that you can get 32 pieces out of the 2 sheets of dap - that's crazy good. Makes it so much easier to make the one you like the most in bulk. Sweet!

Lovely - really like what you did to the back of that envelope too!!

This is a great card. Love it just as much with the bakers twine as with the ribbon.

Love this card and love how you give directions w/ each one. Thanks for sharing :D