Over the years, I have been telling my great customers about all the great paper crafting ideas in the Stampin' Up! Catalogs.  I find that they are a great source for inspiration when my crafting mojo has taken a vacation.  I'll pick a feature in "this card" and another from "that tag" as a springboard for creating a project.  What I never seem to do is make a project directly from the catalog.  And why not?  Many times my customers ask how a project they see in one of the catalogs is made and I'll tell them; but why not make one?

When I was going through the Holiday Catalog, my eye kept returning to the bottom of page 6 and the adorable idea for using the Merry Minis stamp set and the coordinating Merry Minis Punch Pack.  It was so darn cute I just had to make it and I knew that this would be a great project for the first meeting of the SASS Stamp Club.  Little did I know what I was getting myself into... 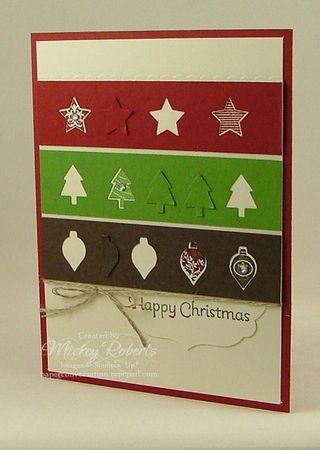 When you look closely at the photo in the catalog, you see that the punches from the Merry Minis Punch Pack were used along strips of Cherry Cobbler (3 times), Gumball Green (3 times), and Early Espresso (4 times).  Then the strips were adhered to a piece of Very Vanilla cardstock.  The Stamp-A-Ma-Jig was used to stamp the star, tree, and ornament images inside some of the punched out areas using the ink color that matches the cardstock strip.  Note that some of the punched out areas were left "blank".  Then some of the punched shapes were used to fill in the areas that weren't punched so that one star, two trees and one ornament were adhered to their respective color cardstock strips.

Sounds simple, doesn't it?  Well the reality of the situation was a whole lot more frustrating.  Let's just say that I had a whole lot more success stamping correctly inside the punched area when standing than when sitting.  Just that little change in angle when sitting would result in the image being mostly inside the punched area and slightly on the cardstock strip.  Argh!  Therefore, to get the finished image you see above took more than a few attempts.  Then I thought of how the girls in the SASS Stamp Club might feel about such a narrow tolerance for placement of the stamp.  Needless to say, I had to rethink the process.

Here's the sample panel for the projects that they made. 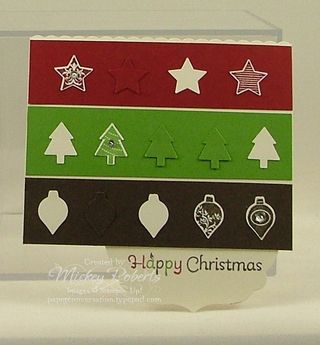 Rather than punching the shapes from the strips of Cherry Cobbler, Gumball Green, and Early Espresso cardstock, the shapes were punched from scraps of those colors of cardstock.  The stars, tree, and ornaments were stamped on scraps of Very Vanilla cardstock and punched out with their corresponding punch.  The cardstock strips were adhered to the Very Vanilla piece and then the punched pieces were adhered to the strips.  So much easier and quicker!

A small Jewels Basic Rhinestone was placed at the center of the stamped tree and at the center of the oval on one of the stamped ornaments.  A Very Vanilla strip was punched with the Dotted Scallop Ribbon Border and adhered along the back of the Very Vanilla panel so that only one scallop edge peeks above the top edge of the Cherry Cobbler strip.  The "Happy Christmas" greeting from the More Merry Messages stamp set was inked with the brush tip of Cherry Cobbler, Gumball Green, and Early Espresso Stampin' Write Markers and stamped on Very Vanilla cardstock.  The cardstock was then die cut in the Big Shot using the Labels Collection Framelits.  The top half of the die cut label was adhered to the back of the focal point panel.  Then the focal point panel was adhered to a 4" x 5 1/4" Very Vanilla panel.  A piece of Linen Thread was wrapped around the panel and tied in a bow to the left of the greeting. 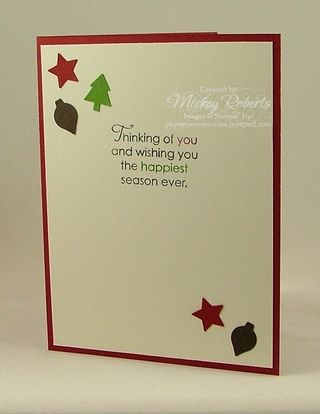 The inside sentiment area of the card was lined with a piece of Very Vanilla cardstock.  A greeting from the More Merry Messages stamp set was inked with the brush tip of the Cherry Cobbler, Early Espresso, and Gumball Green Stampin' Write Markers and stamped at the upper center of the liner.  Star, ornament, and tree punched shapes were adhered at the top left and lower right corners of the liner. When it was time to demonstrate the project at the August meeting of the SASS Stamp Club, I brought out the Stamp-A-Ma-Jig and showed how the focal point panel was created to match the sample shown in the catalog.  When I finished the demonstration, I could tell that there was some serious trepidation about making the project.  Then I began the second demonstration with the easier-to-make focal point panel and the sighs of relief were heartfelt.  I left it up to each of the members to choose the process for making the focal point panel.  Imagine my surprise when all chose the easier path.  I know I would have!

P.S.  CASE = Copy And Share Everything.  It's a well-used term in the paper crafting world.  Why reinvent the wheel when someone else has already done the design work?  The important thing is to give credit where credit is due.

What a super cute card! Glad that you figured out an easier way to make it!

Nice Job! Our catalogs have such great samples it would be a shame not to CASE them.

LOL! I can relate very well to your process! And I love that you demonstrated version 1 and version 2. This is why you want an SU demonstrator! We take the work out of it for you :)

Hooray for an easier way! And your card is just as cute too. :)

I also tried making the card from the Holiday Catalog as one for my recent Stamp-a-Stack. I gave up and didn't have any "mini" stamping except for a row of trees along the bottom of the card front and inside. I did force everyone to peel apart some of the Core'dinations CS though for the punched images. That is also not recommended!

I was so excited to find your post on the "alternate" way to make this card. I was concerned it would be difficult the original way. Your way turned out much better. Thanks!