Here's the third project I featured during the Stampin' Addicts Holiday Catalog Blog Hop the weekend of August 17-19.  The focus of my projects for the Blog Hop is the Border Banter stamp set.  So you may be wondering where the border stamp was used on this project.  [Hint:  Take a closer look at the bottom half of the card front.] 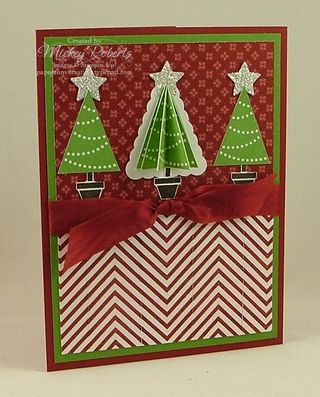 Five of the punched garland trees were scored from the tip of the tree to the bottom edge to fold the trees in half.  The trees were then adhered together (right side of one tree to left side of the next).  The outermost left side and outermost right side was adhered at the center of the Whisper White scallop edge pennant.  The remaining two garland trees were adhered to the right and left of the center tree and the remaining tree stands adhered below the left and right trees.  Three stars were punched from Silver Glimmer Paper using the small star punch from the Merry Minis Punch Pack and adhered at the top of each tree using Mini Glue Dots. 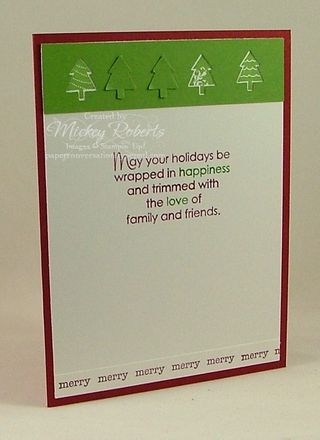 The inside sentiment area of the card was lined with a piece of Whisper White cardstock.  A strip of Gumball Green cardstock was punched three times using the tree punch from the Merry Minis Punch Pack and adhered along the top edge of the Whisper White cardstock.  The tree images from the Merry Minis stamp set were stamped inside the punched out trees using Gumball Green ink and the Stamp-A-Ma-Jig.  Two of the punched out trees were adhered in the non-punched area of the Gumball Green cardstock using Mini Glue Dots.  The "merry merry merry merry merry" image from the Border Banter stamp set was stamped across the bottom edge of the Whisper White liner using Cherry Cobbler ink and the Stamp-A-Ma-Jig.  [You'll note that the line of "merry"s was adhered along the bottom edge of the liner for the sample shown above.  This is because I did NOT use the Stamp-A-Ma-Jig on the liner and had to replace it with the strip adhered along the bottom edge.]

A lovely sentiment from the More Merry Messages stamp set was inked using the brush tip of the Cherry Cobbler and Gumball Green Stampin' Write Markers and stamped near the upper center of the liner. 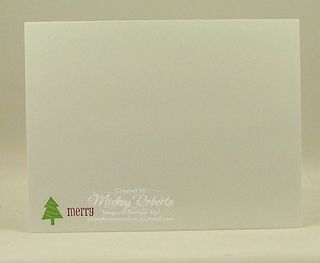 I hope you found some inspiration for using the fun images contained in the Border Banter stamp set.  I had a great time designing the projects featured during the Stampin' Addicts Holiday Catalog Blog Hop.

Please come back to visit soon.  I have a list of projects that are waiting for blog posts to be written using products from the Holiday Catalog and the 2012-2013 Catalog.  I'm hoping to get those posts published in the next few weeks.

This is absolutely beautiful. Thanks so much for the instruction on using the Border Banter to create the panel on the bottom of the card. The 3d trees are amazing too. I can feel a case coming on.

Great card, and the inside is super cute too!! Love it!

Wonderful use of the chevron stamp.

Such a fabulous card. I love all the details on it. And the inside and envelope are fabulous too!