Hope you're having a great weekend!  It's a little overcast here and we're supposed to get a boatload of rain this weekend due to a tropical system that's developing in the lower Gulf of Mexico.  Needless to say, the weathermen are going bonkers with excitement-inducing adjectives and colored lines of storm path predictions.  Good Grief.  We need the rain, though, and the overcast skies help keep the temperatures below 90; however, the humidity is pretty oppressive.  Definitely Summertime in Florida.

Today's post features the Wedding Box-Card that I shared during the Stampin' Addicts New Catalog Blog Hop last weekend.  The card base uses a single sheet of 8 1/2" x 11" cardstock in a unique fold that makes presentation of a gift card a fun experience for the recipient.  I learned to make the unique fold for this project at a downline training meeting hosted by my Stampin' Up! upline, Catherine Harwood. 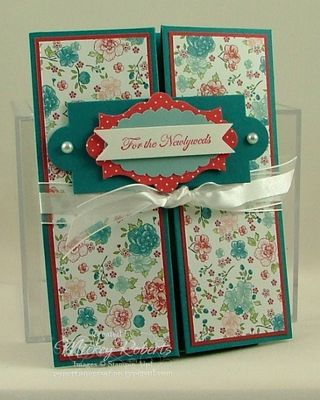 We begin with a single 8 1/2" x 11" sheet of Island Indigo cardstock.  Using the Simply Scored Scoring Tool, the cardstock is scored in the Portrait orientation at 1 1/2" and 7" and the Landscape orientation at 2 1/2", 4", 7", and 8 1/2".  The Diagonal plate was added to the Simply Scored Scoring Tool platform and diagonal scores were made at the 5 1/2" mark down to the intersection of the 7" Landscape and 1 1/2" Portrait score lines; the cardstock flipped over and the same diagonal score line was made to create an inverted "v" in that area.  Then the cardstock was turned 180 degrees and the inverted "v" was scored again.  Once all the score lines were made, the left and right edges of the cardstock (in the Landscape orientation) were trimmed off 3/8" to size the card to fit into a Medium Whisper White envelope.  Paper Snips were used to cut along the score lines to create and shorten the flaps used to build the box area.  See the diagram below. 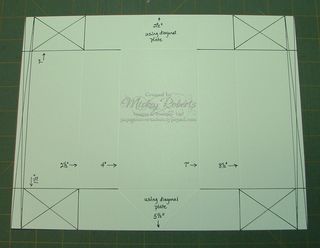 Fold the Island Indigo cardstock at the score lines and place Sticky Strip where shown on the flaps.  Note that the diagonal score lines will be pointing up so that they will fold into the card when the card is assembled and folded. 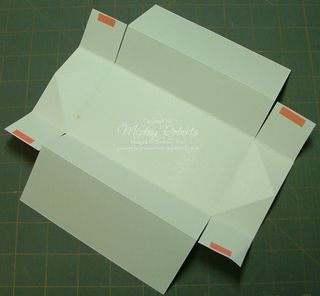 Fold the flaps forward under the side flaps one at a time to create the corners of the box. 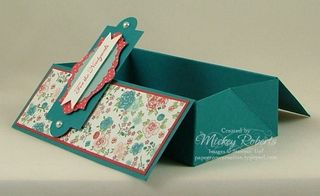 Once the box is assembled, it's time to begin embellishing.  Pieces of Twitterpated Designer Series Paper were matted with Riding Hood Red cardstock and adhered to each of the card front panels.  The card focal point begins with a piece of Island Indigo cardstock die cut in the Big Shot using the rectangular frame from the Apothecary Accents Framelits.  The polka dot "For You" label from the Layered Labels stamp set was stamped on a piece of Whisper White cardstock using Riding Hood Red ink.  The "For the Newlyweds" sentiment from the Teeny Tiny Wishes stamp set was stamped on Whisper White cardstock also using Riding Hood Red ink. The insert is not adhered to the bottom of the box until after the sender has signed their name(s) and/or written a personal message.  A gift card will easily fit into the box section of this card along with the sentiment insert.  You can place the card into a Medium Whisper White envelope, or to present in person or drop into the Bridal Mailbox, wrap a piece of Whisper White 5/8" Organza ribbon around the card and knot it on the front just below the focal point. 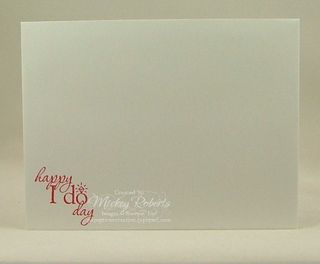 The "happy I do day" sentiment was stamped at the lower left front corner of the Medium Whisper White envelope.  If this card were mailed it would require extra postage because of the thickness of the folded card and the necessity for hand cancellation because of the pearls on the focal point.  With something this special, however, I think the extra postage is a non-issue.

I hope you've enjoyed all the projects I have shared from the Stampin' Addicts New Catalog Blog Hop.  The Layered Labels stamp set is certainly versatile and, combined with the Apothecary Accents Framelits for the Big Shot, presents a wide variety of options for adding a touch of elegance to any paper crafting project.

Have a great weekend!

Thanks soooo much for sharing your instructions!! thought this was too cute when I saw it on the blog hop!

Wow! Great directions, and a gorgeous card! Thanks for sharing how you made it :)

That is so cool!! Thank you for the directions, I can't wait to try it!

What a beautiful card!

Fabulous! Pinning this one too because I'm always looking for fun fold ideas. :) Thanks for sharing it!