It's Graduation Season.  A pretty amazing time of the year for the graduates and their very proud families.  In my family, we have a few graduations this year and I've been making some cards for these awesome students.  The first one I'd like to share with you is another commission from my sister-in-law for her youngest granddaughter who will be graduating from her private school and entering High School.  A pretty important transition.  As with the cards for the 16 year old twins, I was at a loss for ideas and decided to do some blog surfing for something fun and unique.  I found it at Dawn Olchefske's blog--with a video tutorial!!  Dawn used a stamp set that has since retired, but Stampin' Up! made that stamp set available as a digital download for My Digital Studio.  Hooray!  So here's my card, using the graduate's school colors of Navy Blue (Night of Navy), Red (Real Red) and White (Whisper White). 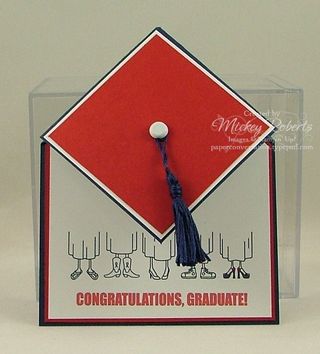 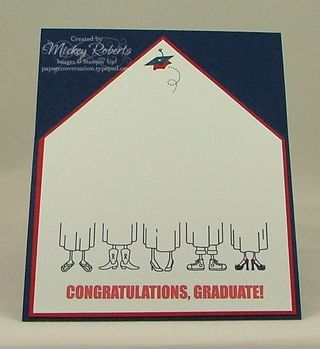 A hidden inside message is also part of this card and was also printed on Whisper White cardstock.  I placed the "go you" image below the owl image, leaving them in the Basic Black default for the line images.  I colored the mortar board on the owl with the pen tip of Night of Navy and Real Red Stampin' Write Markers and a dot of white UniBall Signo Gel Pen for the cap button.  The Whisper White cardstock was cut to fit the diamond-shaped opening, matted with a piece of Real Red cardstock, and adhered to the card base. 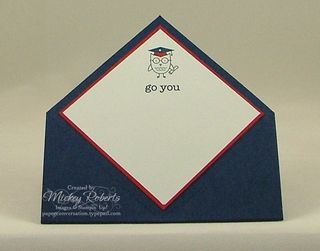 The diamond-shaped area at the top of the card was decorated to look like the top of a mortar board.  A Whisper White 5/16" Neutrals Brad was placed at the center of a piece of Real Red cardstock [I made the tassel with DMC Embroidery Floss (color #336); however, you could use a piece of Whisper White 1/4" grosgrain ribbon as Dawn demonstrated in her video tutorial] with the knot of the tassel hanging loop tucked under the hood of the brad.  The Real Red cardstock was matted with a piece of Whisper White cardstock and adhered to the diamond-shaped area on the card front. 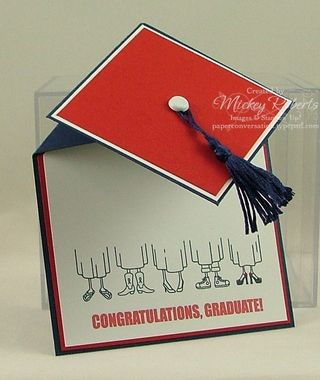 This fun fold card fits into a Medium Whisper White Envelope.  However, to add to the special occasion I decided to make the envelope using the Simply Scored Scoring Tool with the Diagonal Plate .  A piece of Night of Navy striped paper was pulled from the Regals Designer Series Paper Pack, cut and scored using the instructions included with the Diagonal Plate for this size envelope.  Note that the stripes are vertical in the Designer Series Paper Pack; however, because the envelope is scored on the diagonal plate, the lines on the completed envelope are diagonal. 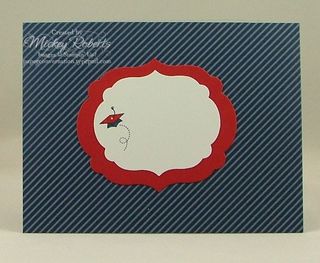 I printed another tossed mortar board image on Whisper White cardstock, leaving the image in the default Basic Black, and colored it with the pen tip of Night of Navy and Real Red Stampin' Write Markers and a dot of white from the UniBall Signo Gel Pen.  I die cut the cardstock using the Big Shot and the Labels Collection Framelits.  Then I die cut a piece of Real Red cardstock using the next larger size of Labels Collection Framelits.  These pieces were adhered at the center of the envelope front.

Here's another card--this time for a young man who will be graduating in a couple of weeks using his school colors of Deep Red (Cherry Cobbler), Gold (Brushed Gold), Black (Basic Black), and White (Whisper White).  When I finished the card I realized that this card was just a little too lighthearted for a High School graduation and went with another design (you'll see that card in the next blog post). 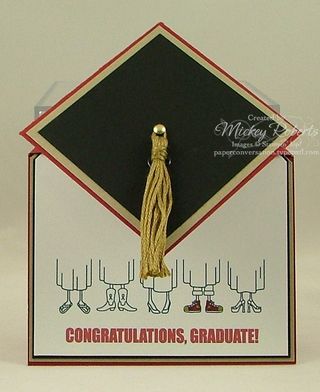 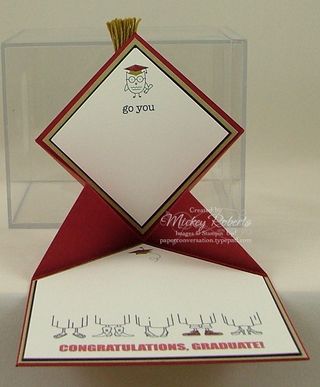 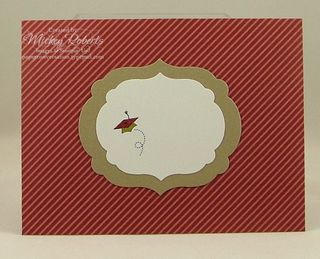 It's made the same way as the first card, but it's amazing how the different colors change the "feel" of the card.

I'll be back soon to show you the graduation card I made for the High School senior.

Wow, these are just fantastic Mickey! Love the little tassels. I don't have that feet stamp and now you have me wishing I did!

Fabulous graduation card!! That fold is just so perfect!! Love it!