This blog post features the second of three cards inside the Smooches for Mom card box featured in this post.

The fun and bright colors in the patterns of the Summer Smooches Designer Series Paper just make me smile.  My favorite pattern is the one peeking out of the Blossom punch on this card. 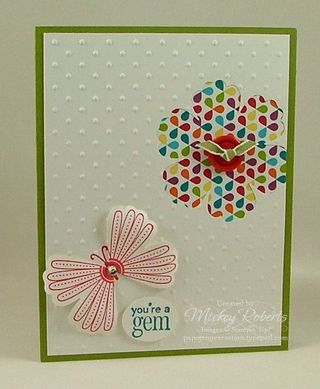 This card begins with a piece of Whisper White cardstock run through the Big Shot inside the Perfect Polka Dots Textured Impressions embossing folder.  The upper right edge of the embossed cardstock was inserted into the Blossom punch and punched so that the tips of one or two of the petals is beyond the edge of the cardstock.  A piece of Summer Smooches Designer Series Paper was adhered behind the punched area with the edges of the Designer Series Paper aligned with the edge of the embossed cardstock.  The embossed cardstock was then adhered to the Old Olive card base.  A Real Red Brights Button was adhered to the center of the Designer Series Paper inside the punched flower with Mini Glue Dots.  A piece of Old Olive 1/8" Taffeta ribbon was knotted and adhered to the center of the button with a Mini Glue Dot. 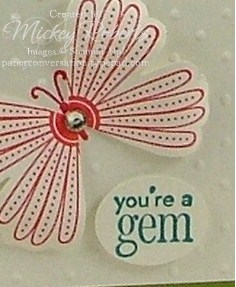 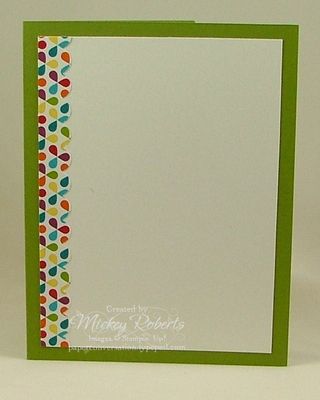 The inside sentiment area of the card was lined with a piece of Whisper White cardstock.  One edge of a piece of the Summer Smooches Designer Series Paper was punched with the Scallop Edge Border punch and adhered to the left side of the liner. 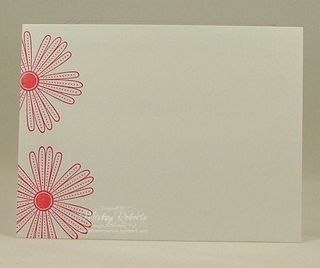 I've seen a bunch of cards with the Blossom punch used in an "off the edge" manner so I'm not quite sure who to give the credit to for the design idea.  The inspiration for the butterfly wings made from the Mixed Bunch stamp set and Blossom punch comes from the sample shown in the Occasions Mini Catalog; however, the addition of the Basic Rhinestones and "you're a gem" sentiment comes from a 3" x 3" card I made during a downline training meeting with my Stampin' Up! upline, Catherine Harwood.

As a reminder, the Mixed Bunch stamp set and coordinating Blossom punch are available only until April 30th from the Occasions Mini Catalog.  I'd like to say that these items will be carried over to the new catalog on June 1st; however, Stampin' Up! hasn't notified us yet of that information.  So, to avoid missing out, you'll need to order these items in the next few days.

The You're A Gem and Butterfly Prints stamp sets will be retiring at the end of the current Stampin' Up! Idea Book & Catalog on May 31st.  I just love these two stamp sets and will definitely miss having them available to me on my work table.

Finally, the Summer Smooches Designer Series Paper is available only for the month of April as a Sneak Peek from the 2012-2013 Idea Book & Catalog.  After this month, you'll have to wait until June 1st before you can order it.  Just sayin'...

I'll be back tomorrow with the third card from the Smooches for Mom card box.  I look forward to visiting with you then.

Great card!! Love the DSP behind the punch, and that butterfly is super cute!!

Such a fun, happy card. Love the bright colors and of course the butterfly. Too cute! TFS

You're on a roll here! Mist try the butterfly embellishment myself, it's perfect for this light, airy card!

That butterfly is fabulous! Such a fun card.