I hope that you've been doing well and had a wonderful day full of loving thoughts and feelings on Valentine's Day.  My son and his wife took an extended weekend trip to London and Paris and toured the Eiffel Tower on Valentine's Day.  (My son is in the US Navy and stationed in Sicily at the present time.)  Aren't they just adorable? (What could be more romantic than Paris on Valentine's Day?)

I realized on Wednesday that I had made a simple Valentine's Day card for the January meeting of the SASS Stamp Club and forgot to show it to you before Valentine's Day.  Bummer!  However, this design would certainly lend itself to Wedding, Anniversary, or Engagement cards. 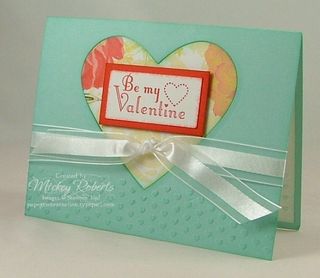 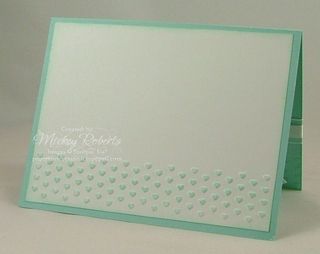 The inside sentiment area of the card was lined with a piece of Whisper White cardstock.  The bottom edge of the cardstock was embossed with the Adorning Accents Hearts Textured Impressions embossing folder and the edges of the cardstock and embossed hearts were sponged with Pool Party ink. 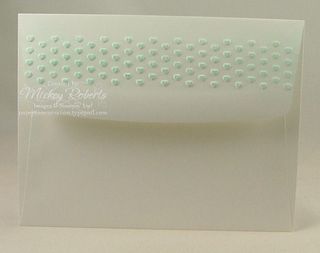 The Adorning Accents Hearts Textured Impressions embossing folder was also used to emboss the flap of the Medium Whisper White envelope.  The Pool Party ink sponge was brushed across the embossed hearts to bring them into higher relief.  You can see on the envelope flap, the Whisper White cardstock at the inside sentiment area of the card, and on the card front that the embossing folder tends to create a few very slight "wrinkles" in the cardstock and paper.  When the ink sponge was brushed cross the embossed areas, the "wrinkles" picked up more color than the other areas of the embossed hearts which seemed to create a somewhat marbled effect on the embossed hearts.  A fun surprise! 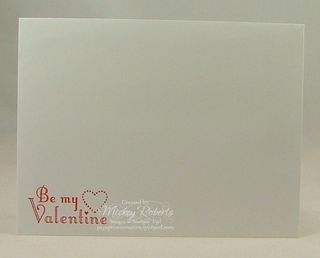 To finish off the envelope, the Valentine's sentiment was stamped at the lower left front corner.

I just love all the new accessories for the Big Shot that are featured in the Occasions Mini Catalog.  AND, did you know that there are a couple of Textured Impressions embossing folders for the Big Shot that you can select for FREE with a $50 merchandise purchase during Sale-A-Bration?  Just look on pages 13 and 16 in the Sale-A-Bration Brochure.  Don't have a brochure?  Just click on the brochure located on the left sidebar of this web page.

I'll be back early next week with another foray into hearts.  Have a great weekend!

Ohhh so lovely!! Love the soft colors and the watercolor feel of that heart!!

I love the touches on the inside and the envelope. And what a fabulous picture! I think I need to add a visit to the Eiffel Tower to my bucket list for sure!

What a sweet Valentine! I love the sponged embossing, and on the inside, too! Great picture, too!

Mickey - you give such wonderful complete direction for re-creating your card design!

Love the card! The picture is fabulous!

So sweet! Your are right it does lend itself to a good wedding, engagement or anniversary card!

How cool they got to go to Paris on Valentines Day!! Love your card!

What a wonderful picture this is!! Beautiful card, as always!

Simply Beautiful! And that is a wonderful picture of your son and DIL too.