A strange kind of day today.  I'm still at the hospital with my Mom and she is currently in surgery.  I'm praying that two hours from now finds her at the beginning of a journey that has a whole lot less pain.

Today's post presents the fourth of the five cards I designed for my annual Christmas Card class.  This one is the one that I struggled most to work out, the simplest of the designs, and ended up being my favorite of the five cards.  It always amazes me where the design process will take you. 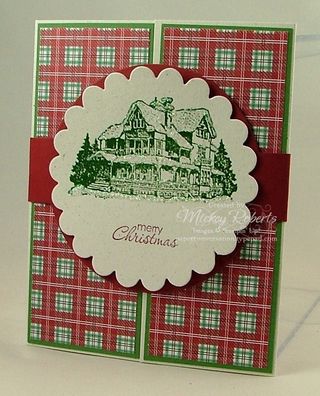 This card features the Christmas Lodge stamp set and the Frostwood Lodge Designer Series Paper (both from the Holiday Mini Catalog).  We begin with a card base of Naturals White cardstock scored and folded to create a gate fold. 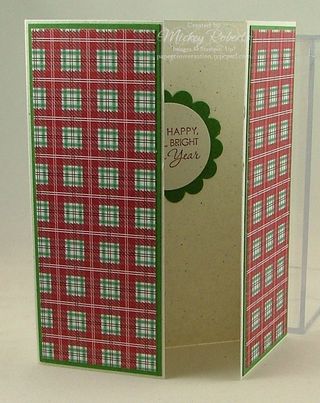 This means that for a piece of cardstock measuring 5 1/2" x 8 1/2", score the cardstock at 2 1/8" and 6 3/8" along the 8 1/2" length.  Then the cardstock is folded along the score lines so that each flap folds to the center.  Each of the "gates" are adorned with one of the fun plaid papers from the Frostwood Lodge Designer Series Paper matted with a slightly larger piece of Garden Green cardstock. 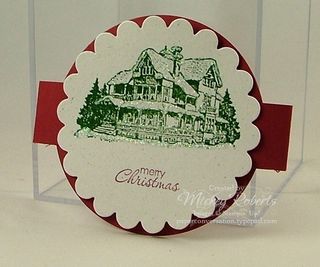 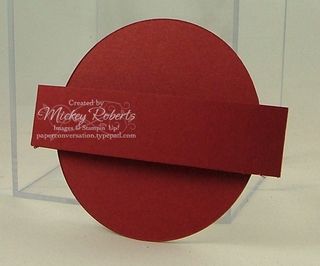 (click on the belly band to see larger images)

The closure for this card is a belly band of Cherry Cobbler cardstock folded and adhered to a circle die cut with the Big Shot and the 3 1/2" circle Originals die.  [Place the band horizontally on the tabletop and center the folded card base on the band.  Fold each side of the band over to toward the center of the card base.]  A scallop circle of Naturals White cardstock was die cut using the larger of the two scallop circles on the Scallop Circle #2 Bigz die with the Big Shot.  The house image from the Christmas Lodge stamp set was stamped in the upper half of the scallop circle using Garden Green Craft ink.  The stamped image was covered with Clear Embossing powder and melted with the Heat Tool.  Dazzling Details glitter glue (from the Holiday Mini Catalog) were added to the embossed image over the snow areas of the house (roofs, porch rails, chimney tops, just under the shrubbery and trees surrounding the house).  The "merry Christmas" sentiment from the Petite Pairs stamp set was stamped in the open area below the house using Cherry Cobbler ink.  Once the Dazzling Details were dry (approximately 30 minutes) the scallop circle was adhered to the belly band.  I used Sticky Strip to adhere the belly band to the Cherry Cobbler circle and to the back of the Naturals White scallop circle because I wanted to make sure that the belly band stayed intact with repeated movement of the belly band as it is removed and replaced on the card base (by sliding the belly band up or down on the card base). Since the card base is Naturals White, there was no need to line the inside sentiment area of the card.  A 1 3/4" scallop circle was punched from a scrap piece of Garden Green cardstock and adhered near the upper center of the card interior.  The Christmas greeting from the Petite Pairs stamp set was stamped on a scrap piece of Naturals White cardstock using Cherry Cobbler ink, punched out using the 1 3/8" punch, and adhered to the center of the Garden Green scallop circle.

The two birds on a branch image was colored with the brush tip of Garden Green, Cherry Cobbler, and Chocolate Chip Stampin' Write Markers and stamped just to the upper left of the Garden Green scallop circle. 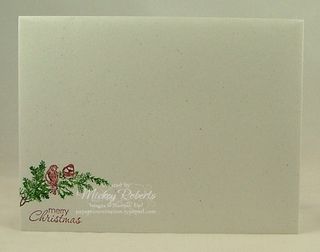 I'll be back soon with the final card designed for the Christmas Card class.  I look forward to your visit!

Gorgeous card -- love the belly band!! Hoping for a successful outcome for your mom!

Wow! Beautiful card! You are a talented lady!

Wonderful idea for a mailable card! I have way too many that are going to need extra postage this year. :/

Love the gate fold...adds an inteesing look to your pretty card!

Fabulous card! The Gate fold really does give it a little something special.