I'm so jazzed!!  I just finished a Skype conversation with my son and daughter-in-law.  How cool is that!!!  He's in the USNavy and stationed in Sicily.  They are pretty much settled in now and looking forward to visiting all there is to see in Europe.  You can bet that my husband and I are busy tucking away the $$ so that we can visit them.  My husband is really itching to go...he was stationed in Sicily some years ago when he was in the USNavy and has many happy memories of the time he spent there.  We've been speaking to my son on Skype since he and his wife arrived in Italy a few months ago, but this is the first time that I was able to speak to my daughter-in-law and it was so good to see both of them at the same time.  What a great birthday present!

OK, now back to work.  Today's post is the second of the five cards I designed for my annual Christmas Card class.

A scrap piece of Riding Hood Red cardstock was punched with the Modern Label punch and adhered near the lower center of the Old Olive panel using Stampin' Dimensionals.  The "Merry Christmas" sentiment, from the Teeny Tiny Wishes stamp set, was inked with Old Olive ink and stamped on a scrap piece of Whisper White cardstock, punched with the Word Window punch, and adhered to the center of the Riding Hood Red cardstock Modern Label using SNAIL. The inside sentiment area of the card was lined with a panel of Whisper White cardstock.  The ornate snowflake from the Winter Post stamp set was stamped three times at the lower left corner and once at the upper right corner of the panel using Old Olive ink. 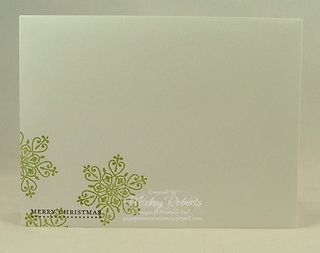 The ornate snowflake was stamped three more times near the lower left front corner of the Medium Whisper White envelope.  The "Merry Christmas" sentiment was stamped among the snowflakes using Early Espresso ink.

The piece of Letters to Santa Designer Series Paper used for this card is 2 1/4" x 3 1/8" which means that with careful cutting you can cut 18 pieces from one 12" x 12" sheet.  If you used both sheets in the package, you'd be able to make 36 Christmas cards very quickly since this card design is perfect for bulk production.

Gorgeous card! I love how you combined the dots and the stripes!

The stripes on the DSP make this especially festive. I bet your ladies love it :)

This is really lovely, Mickey! And happy birthday, too!!!

Okay...Skype really is the best! So glad you got to "see" your family that way! Fantastic card. Love that bow, and the stripes, and the rhinestone...

Beautiful card! And yay for Skype!