Here's a Halloween card that I designed for a Shoebox Swap.  The Swap occurred the last weekend of September at Stampcation.  This fun 2-day event is hosted by Linda Heller and Shantaie Fowler and consists of demonstrations by local Stampin' Up! Demonstrators, awesome Make & Takes designed by Linda and Shantaie, the Shoebox Swap, and lots of time and table space to work on your own projects. A Shoebox Swap card is intended to be completed in 10-15 minutes using a design that can be followed with little or no written instruction.  Since we only had the space available on a Stampin' Up! grid sheet to work with, we needed to complete any work that required time consuming steps or tools that require lots of space.  So the gold embossed frame, black embossed owls, and the texture for the More Mustard cardstock were completed ahead of time.

The spider web image, from the Wicked Cool stamp set, was stamped a couple of times on Very Vanilla cardstock using More Mustard ink.  The "Spooky" image, also from the Wicked Cool stamp set, was stamped over the spider webs using Early Espresso ink.  The cardstock was inserted into the paper slot of the Medium Oval punch, centering the "Spooky" in the punch window, then punching the oval.  The edges of the oval were sponged with Cajun Craze ink.  A Scallop Oval was punched from Cajun Craze cardstock and the edges sponged with Cajun Craze ink.  The "Spooky" was adhered to the center of the scallop oval with SNAIL and adhered near the right edge of the Well Worn Designer Series Paper using Stampin' Dimensionals. 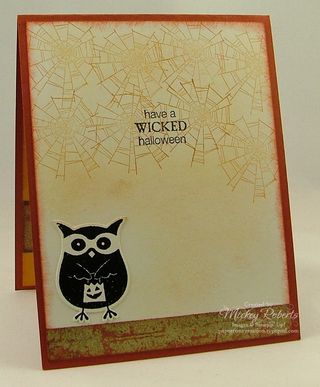 The inside of the card was lined with a piece of Very Vanilla cardstock with a strip of Well Worn Designer Series Paper adhered along the bottom edge of the liner.  (The edges of the cardstock and the strip of Designer Series paper were sponged with Cajun Craze ink.)  The spider web image was stamped repeatedly across the top third of the liner and the "have a WICKED halloween" image, from the Wicked Cool stamp set, was stamped near the upper center of the liner using Early Espresso ink.  The second embossed owl was adhered just above the Well Worn Designer Series Paper. 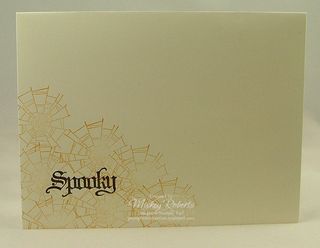 I had a great time at Stampcation and will be showing you more from that event very soon.

That is too cute!! I love the owl in the frame! What an adorable idea!

Mickey,
This was one of my favorite swaps from Stampcation! I didn't realize it was your card! Awesome!

Great card Mickey and I love your detailed instructions. The gold frame is awesome and I will have to remember this idea so that I can use it on one of my cards. Thanks for the inspiration

I love the frame idea! Plus the inside--wowzer!

Teehee! I love the framed owl....it looks like it should be a photo on a mantle of someone's kid in an owl costume. :)

Oh, my goodness! I love the inside of this as much as the outside! Perfectly fantastic!!

So cute! Love the frame around your owl!

So cute!! Love how you stamped on the envelope too!