A Nature Walk for Mom

Hello!  Thanks so much for stopping by to visit!

A few blog posts ago, I posted a card made using the Nature Walk stamp set and promised that I'd revisit that card to present it to you. 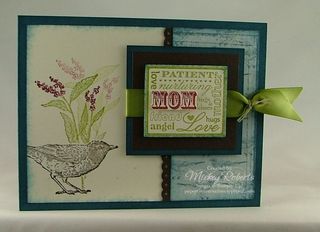 Isn't this card pretty?  I wanted to make a Mother's Day card that wasn't pink, or purple, or fussy, or glittery; but still conveyed an important message.  I think this one does just that.

This card begins with a card base of Not Quite Navy; the edges of the card front sponged with Not Quite Navy ink.  A piece of Very Vanilla cardstock was stamped with the bird image from the Nature Walk stamp set using Early Espresso ink.  The bird was stamped a second time on a Post-It Note and cut out to create a mask.  The mask was placed over the bird on the Very Vanilla cardstock so that the foliage could be added.  The foliage image was inked with Old Olive ink and a Blender Pen was used to remove the Old Olive ink from the flowers.  Then the brush tip of the Cherry Cobbler Stampin' Write Marker was used to ink the flowers.  After giving the stamp a "huff" to remoisten the ink, the foliage was stamped right over the masked bird.  The image was immediately stamped a second time, moving the stamp up about 1/2 inch and angling the stamp to the right just a tad.  The Post-It Note mask was then removed from the bird.  The edges of the Very Vanilla cardstock were sponged with Not Quite Navy ink.

The focal point of the card features the Mother of Mine single stamp.  I love to use these kinds of word collage stamps and this one is extra nice because it's just the right size for a focal point.  The image was stamped first on Very Vanilla cardstock.  The edges of the cardstock were trimmed close to the border of the stamped image and then the edges were sponged with Not Quite Navy ink.  The stamp was cleaned and the image stamped on a scrap piece of Very Vanilla cardstock, this time using Cherry Cobbler ink.  The word "MOM" was cut out of the stamped image using Paper Snips and adhered to the Old Olive image with Stampin' Dimensionals. 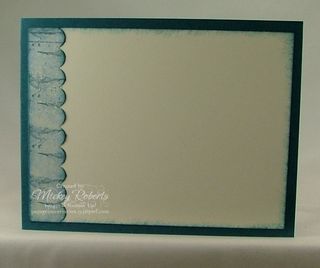 The inside sentiment area of the card was lined with a piece of Very Vanilla cardstock; the edges of the cardstock sponged with Not Quite Navy ink.  A strip of Botanical Gazette Designer Series Paper was punched with the Scallop Border punch, the edges of the paper sponged with Not Quite Navy ink, and then adhered along the left edge of the Very Vanilla cardstock. 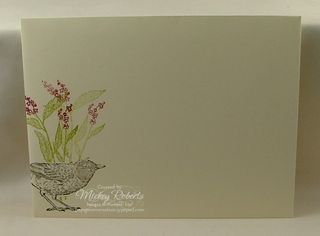 The lower left front of the Very Vanilla envelope front was stamped in the same manner as the card front.

My sister and I are currently working on our plans for the annual Mom's Lunch.  We gather with our sisters-in-law and our Mom for a quiet lunch the Saturday before Mother's Day.  I look forward to this time that we spend together; sharing the special bond all of us have as a Mother.  We celebrate ourselves, our family, and the husbands left home for the afternoon with the children.

Gorgeous card! I love your masking with the bird!!

Very well put together! I love how you did the masking and popped up the mom sentiment.

Lovely card! I am so sad that the Occasions Mini will be done in less than a month. If you don't have this set yet, you better hurry up and get it!!

WOW! Just beautiful! And not even fussy!

Beautiful!! I love this card!!

Beautiful! Great use of the two stamp sets!

Beautiful card! Love your envelope, too!