Hello!  It's coming down to the wire now...Christmas is only a few days away.  I hope that you're finding time to sneak in some fun with family and friends in between all the errands and chores associated with the Holidays.

Here's the fifth (and final) card I designed for the Christmas Card class.  This one includes some non-traditional colors to focus on the fun and excitement of the Holiday Season while conveying an important message of the Season.  The Angels brought the shepherds this most significant message of the Christ child's birth--a message designed to bring Comfort to those who longed for the Messiah and Joy to celebrate in HIs arrival. 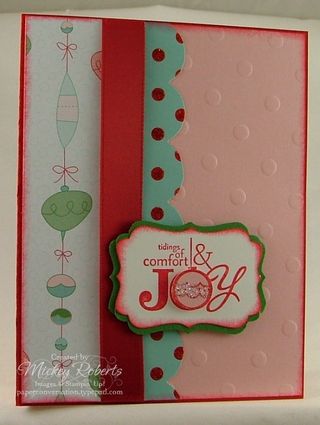 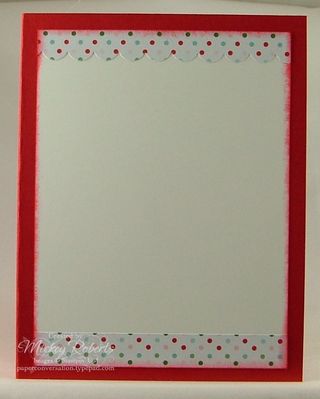 The interior of the card was lined with a piece of Whisper White cardstock.  Pieces of Candy Cane Specialty Designer Series Paper decorate the top and bottom edges.  The top piece has some extra interest with a border punched with the Scallop Edge Border punch.  The edges of the liner were sponged with Real Red ink. 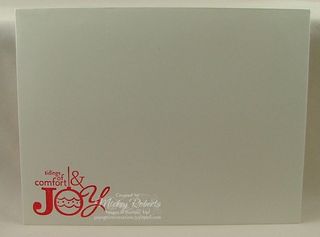 The folks who participated in the Christmas Card class this year enjoyed making these cards to send to family and friends during this Holiday Season.  As for me, sending Christmas cards seems to be way down on the list of piorities right now.  Three weeks after his brain tumor hemorrhaged, Dad is beginning to show some small signs of recovery.  He's finally out of the Intensive Care Unit and beginning a complicated rehabilitation.  I think that if Dad had time on his side that he would likely make a nearly full recovery, even taking into account the areas of paralysis on his left side.  Unfortunately, the brain tumor will likely take most of that time away from him.  So we pray that God will allow Dad to heal to the extent that he may be able to recognize his family and have some interaction with them before the brain tumor takes him away from us for good.  It's certainly our Christmas Wish this year.

[Important Note:  Unfortunately, the Candy Cane Specialty Designer Series Paper is no longer available for purchase.  However, you can download a digital version of this paper for use with My Digital Studio or with your own photo/digital scrapbooking applications.  Just print the ornament design paper and mount it to the cardstock.  You could even replicate the embedded red glitter dots on the Baja Breeze background with some Mini Glue Dots and Red Fine Galaxy Stampin' Glitter.]

Really pretty card! Love the ornaments down the side!

Great card with a great message. Like that it has non-traditional colors, too!

Love all the different layers!

Very nice, Mickey! I like the color mix.
Here's wishing you a blessed Christmas!
Diane

A beautiful card Mickey. I wish you well over the Christmas holidays and give your Dad lots of hugs. Thinking of you.

Really like your card! Still praying for your dad! Enjoy every moment you have left and treasure every memory!