Now that Christmas is only a few days away I'm guessing that, like me, you're in a wrapping paper frenzy.  But what can you do about packaging those pesky gift cards?  Here's one solution...just Look Here!  [Note:  I made a variation of this card last year with my Stampin' Up! upline, Catherine Harwood.  To see her card, just click here.] 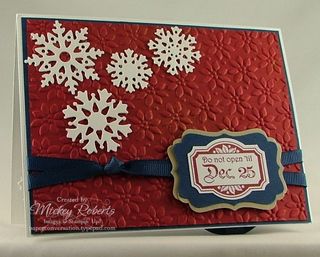 The card front was decorated with a piece of Cherry Cobbler cardstock embossed with the Petals-a-Plenty Textured Impressions Embossing folder (Big Shot) and a few pumps of the Gold Glow Smooch Spritz.  A few Shimmery White cardstock snowflakes were created using the Northern Frost Decorative Strip die (Big Shot) and added to the upper left corner.  Two pieces of Night of Navy 1/4" grosgrain ribbon were knotted and pressed into place along the lower half of the card front; the ribbon ends folded to the back of the Cherry Cobbler cardstock and pressed into place with SNAIL.  On top of the ribbon, a focal point was created using a stern message from the Winter Post stamp set stamped on Whisper White cardstock using Cherry Cobbler ink and punched out with the Designer Label punch.  This image was placed on top of a piece of Night of Navy cardstock punched with the Decorative Label punch. 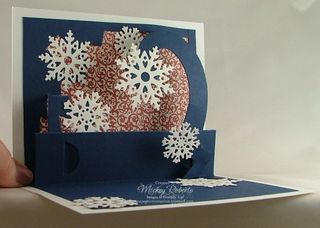 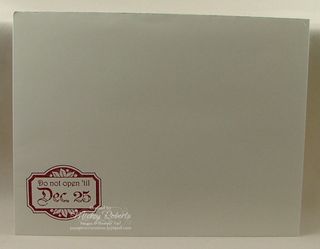 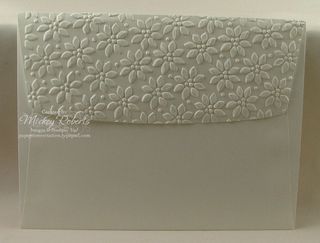 The stern message from the Winter Post stamp set was stamped on the lower left front of the Whisper White envelope using Cherry Cobbler ink.  And the Petals-a-Plenty Textured Impressions Embossing folder was used to emboss the envelope flap.

You may think that making this gift card holder is pretty labor intensive; however, because the Big Shot is doing so much of the work, you can complete a few of these cards in just about an hour.  My guess is that when a loved one receives this present, they'll feel that the packaging is just as impressive as the gift!

I love the idea of hanging snowflakes!

That is so gorgeous! I love the Night of Navy with it!

The Look Here Die and I never really got along. I am so glad to see it used well! I love the snowflakes flying in the air!

Love these colors together! Your use of the snowflakes is wonderful!