Happy Sunday!  I hope you had a great weekend.  In Central Florida, we're enjoying our first weekend that's NOT in the 90's in quite some time.  The sky is bright blue, there are a few puffy white clouds floating by, and a gentle breeze from the sea.  Wow!

Today's project is a set of scrapbook pages designed for the September SASS Stamp Club featuring the Have a Seat stamp set.  I think these scrapbook pages demonstrate that you can achieve a vintage look without a whole lot of detailed work. 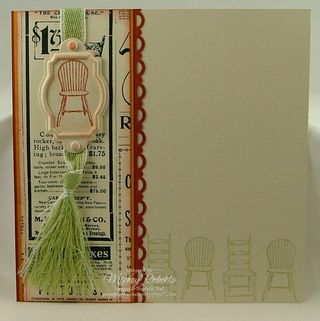 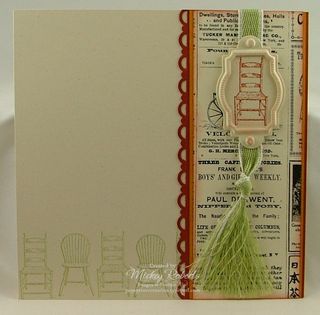 (click on each scrapbook page to see larger images)

The base pages use Naturals Ivory cardstock to complement the Newsprint Designer Series Paper.  I think it's a better match for the background color in the Newsprint Designer Series Paper than using Very Vanilla because it seems to carry a more vintage feel.  The Ladderback and Windsor chair images were stamped across the bottom of each 6" x 6" page with Pear Pizzazz ink.

Before the border strips were adhered to the base pages, a piece of ribbon and some hardware were added.  The Pear Pizzazz 1/2" Polytwill ribbon was knotted toward one end and the area below the knot unraveled.  A Mini Glue Dot was placed under the knot and the knot adhered to the Newsprint Designer Series Paper.  The remaining length of the ribbon was smoothed straight to the top edge of the Newsprint Designer Series Paper and then folded over to the back of the Cajun Craze cardstock.  It's held in place with a bit of SNAIL.  A chair image was stamped on a scrap of Naturals Ivory cardstock with Cajun Craze ink, punched out with the Designer Label punch, and placed behind a Styled Vanilla Hodgepodge Hardware frame placed on top of the smoothed area of Pear Pizzazz Polytwill ribbon.  The brads were inserted into the holes on each side of the hardware frame and the brad legs set on the back of the Cajun Craze cardstock (use a Paper Piercer to make the hole for each brad through the cardstock/Designer Series Paper/ribbon/hardware).  The color on the Styled Vanilla Hodgepodge Hardware is Cajun Craze ink applied with a sponge lightly brushed across the frame.  Finally, the border strip is adhered to the base page with SNAIL.

For the non-scrapbooking members of the SASS Stamp Club, the 6" x 6" piece of Naturals Ivory cardstock was folded in half to create a 3" wide by 6" tall card. 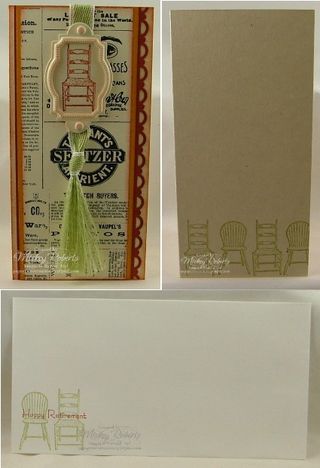 The edges of the card front were sponged with Cajun Craze ink and the border strip adhered approximately 1/8" to the right of the fold.  The chair images stamped with Pear Pizzazz ink now appear across the bottom edge of the inside sentiment area of the card.  One of each chair is also stamped on the lower left front of the envelope so that the seats of the two chairs area level (stamped with Pear Pizzazz ink).  A sentiment from the Teeny Tiny Wishes stamp set "rests" atop the seats of the two chairs (stamped with Cajun Craze ink).

Your pages are very nice...clean, crisp and clear! Luv em'

They are gorgeous! Love how you used the hardware!

Love these pages -- such a clever use of the label hardware. Nice to see you Friday -- I know things have been hectic for you lately (and tiring) so thanks for making time for some die cutting!

Lovely pages! I really like how you used Cajun Craze, a really intense color, and made it still appear light and airy. Beautiful!

Those are REALLY pretty!!