Piecing Together a Jolly Holiday

Hello!  Thanks for stopping by to visit!

As I mentioned in my last blog post, the Holidays are only a few weeks away and I know many of my customers are thinking about a design for this year's Christmas card.  The members of the SASS Stamp Club are actively searching for ideas, so to give them a boost in the idea department, I promised them that we'd be making a Christmas card at each month's club meeting leading up to Christmas.

Here's the card we made at the September meeting.  I wanted to showcase the Jolly Holiday Designer Series Paper because it's so bright and fun.  If you look closely at the Top Note focal point at the center of the card, you can see a strip of paper from every pattern in this Designer Series Paper pack. 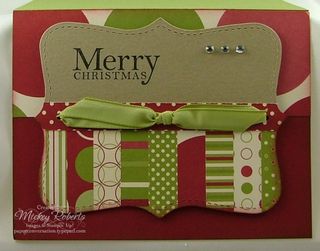 To create the focal point, a 4 1/4" x 5 1/2" piece of lightweight, smooth cardstock (Whisper White or Very Vanilla) was covered with Anywhere Glue Stick and placed on the tabletop with the 4 1/4" side as the height and the 5 1/2" side as the width.  Strips cut from each piece of the Jolly Holiday paper (1/2" x 12" cut into two pieces, 1/2" x 6" each) were placed on top of the cardstock beginning flush with the left side and continuing side-by-side until the entire piece of cardstock is covered, making sure that no pattern is repeated.  Since the cardstock is 5 1/2" wide, this means that you'll have one paper strip left over.  Just set that aside for a minute.

Trim off the overhanging paper from the cardstock and place the cardstock with the paper piecing face down on the Top Note Bigz die.  Run the cardstock and die through the Big Shot.  Flip open the cutting rail on your Paper Trimmer and place the points of the widest part of the die cut so that they are lying centered on top of the cutting trough of the Paper Trimmer.  Close the rail and slice the die cut in half.  Run a piece of Brushed Gold cardstock through the Big Shot with the Top Note Bigz die cut and slice it in half the same way.  Place a Brushed Gold and a paper pieced die cut half with the centers together on the tabletop.  Apply Anywhere Glue Stick to the back of the remaining 1/2" x 6" strip of Jolly Holiday paper and place it across the middle, centered over the seam between the two pieces of die cut.  Use the Bone Folder to burnish the glue in place.  Then sponge Cherry Cobbler ink on the paper pieced part of the combined Top Note die cuts.

The inside sentiment area of the card (not shown) was lined with a piece of Very Vanilla cardstock; the edges sponged with Cherry Cobbler ink.  There are so many great Christmas sentiments that can be used here so I left this blank so that my SASS Stamp Club members could choose a saying that reflected their own feelings about the Christmas season. 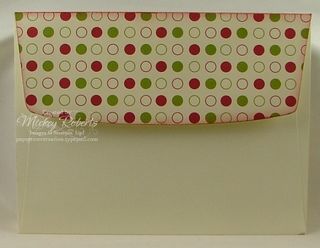 The Very Vanilla envelope was embellished with a piece of Jolly Holiday paper adhered to the envelope flap with Anywhere Glue Stick and then trimmed with Paper Snips to follow the edge of the flap.  The edges of the envelope flap were sponged with Cherry Cobbler ink.  I also stamped the "Merry Christmas" sentiment on the lower left front corner of teh envelope (not shown) using Staz-On Jet Black ink.

You may be wondering what happened to the other half of the paper pieced Top Note die cut.  Well, it's ready to be made into another card!  OR you could use it for a title piece for a scrapbook page by snugging the center edge up to one side of the page or edge of a mat.  And don't forget about the frame that was left over when you created the die cut...think how awesome that would look as a mat for a family Christmas photo either in a frame or on a scrapbook page.

I hope that this card will help to jump start your thought process for designing and making your own Chrismas cards.  For me, making and sending the cards is an important part of my preparations for the holiday season.  It puts me in touch with one of the most important aspects of the season:  conveying the love I feel for family and friends, both near and far.

Wonderful Christmas card. Love what you did with the designer paper. Thanks for sharing

Great card! I love what you did with the envelope!

Wow, I really like that! Love that DSP, it's so bright and cheery! Love how you did the paper on the Top Note!!

Great card for Christmas - love the envelope, too!

Very pretty, Mickey! Great directions on how to do the project.
Diane