Hello!  I hope all is well in your world.

My world is a little crazy right now, but it's a fun kind of crazy.  I've really focused in on my Stampin' Up! business in the last few months and, while the hours have been long, the creativity has been awesome!  I've been meeting lots of people, sharing my love of papercrafting, and enjoying watching folks have a good time while they get their hands sticky and their fingers inky!  I love it!

Today's project was designed for a workshop that occurred yesterday evening.  I met with a wonderful group of ladies who all work together at a local church and are all great friends to each other.  I've met with these ladies many times and they are all pretty talented papercrafters!  So, it's a personal goal for me to create a project that will challenge their papercrafting skills.  Last night's hostess, Sandy, asked for a Fall card, so I pulled out my new Color Coach and looked for a color combo that featured colors that evoked a feeling of Fall:  Cajun Craze, More Mustard, and Not Quite Navy.  I added three neutral colors to this combo:  Crumb Cake (the cardstock color formerly known as Kraft), Early Espresso, and Very Vanilla.  Here's the card that they made.

I'll be honest and admit that when the ladies saw this card at the work table they all ooohed and aaahed, but gave me "the look."  You know, the one that says "You've got to be kidding me!"  So I began to explain how the card was made and "the look" intensified.  The good news is that once they got to work, they realized that the card really wasn't hard to make nor did it take very long to make.  They admitted that the key to this card was in the details.  And it is.  It's ALL about the details.  But if you consider the sentiment, you'd want to have a pretty special card to match such a heartfelt wish.  So here's how the card is made: 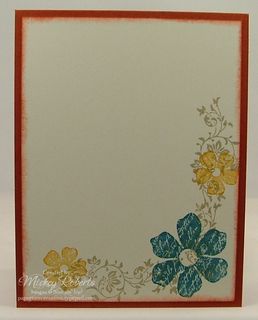 The inside sentiment area of the card was lined with a piece of Very Vanilla cardstock whose edges were sponged with Cajun Craze ink.  The loose vine image was stamped three times in the lower right corner with Crumb Cake ink and a large flower of Not Quite Navy and two small flowers of More Mustard were stamped among the vines. 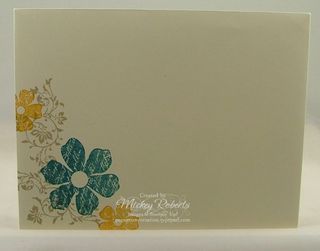 This pattern is repeated on the lower left front corner of the Very Vanilla envelope.  The difference is that the loose vine is only stamped twice.

One of the ladies in the group, while sponging all eight of the flowers, mentioned that the amount of sponging in this project took some time.  I agreed, and before I could discuss why I felt all the sponging was necessary for this particular design, another of the ladies stated that the card just wouldn't be finished without it.  It really is ALL in the details.

Truly a work of art, Mickey. And it sounds like at least one of the ladies "gets" it!!! The one who remarked first probably is more of a CAS card gal. :)

Very pretty card. Thanks for posting the instructions.

I just had to keep referring back to your card as I read how you did it. It's just facinating! It looks like gold outlining the flowers!...I kept thinking she must have used some of the smooch gold lame...but no. And the petals look like you did them out of vellum! Just amazing "details"! LOVE it.

Love the flowers. They are beautiful!

I thought they flowers were gold embossed too! Gorgeous card

Mickey, what a beautiful card. You have so many textures and colours working together. It was great to see how you do all this. Thanks for sharing the "how to"

Just fantastic! You've outdone yourself on this one! I love the sponging on the flowers. It really finishes the card.
I just returned from 2 weeks of vacation and I love seeing what you've been up to! TFS
Diane

Breathtaking! This card gives me goosebumps (a good thing). Your instructions will be very helpful as I CASE this card. Thank you for sharing.

This is absolutely beautiful!!! I think I will have to try it. Thank you so much for sharing this gorgeous card.

I just love this card.
The colors are so warm and gentle.
Anyone who would receive this card would feel well thought of.
Fabulous job.
thanks for sharing.