Hello!  Thanks for stopping by to visit!

I received a big box of goodies from Stampin' Up! this week with my first order from the new catalog.  New toys!  I took all the stuff out of the box, ooohhhed and aaaahhhhed over it, and then began to feel overwhelmed.  Good grief!  So I put all the stamps back in the box, shook it up, stuck my hand in and pulled out a stamp set.  I pulled out Punch Potpourri, a Level 1 Hostess set.  While I was mounting the stamps, I began visualizing how I would use these images and my thoughts turned to texture and gold and rich colors and shimmer and distressing and sponging and crumpling and more sponging.  Yep, I was going to make a Vintage card.

The great thing about Vintage cards is that you can create lots of interest with a few items if you think texture and layers.  In fact, when I first began stamping, the distressed look using found items was huge in card making and for things like Altered Books.  So I got to work and starting crumpling and distressing and sponging.  The inkier my hands got, the happier I became.  Oh, boy! 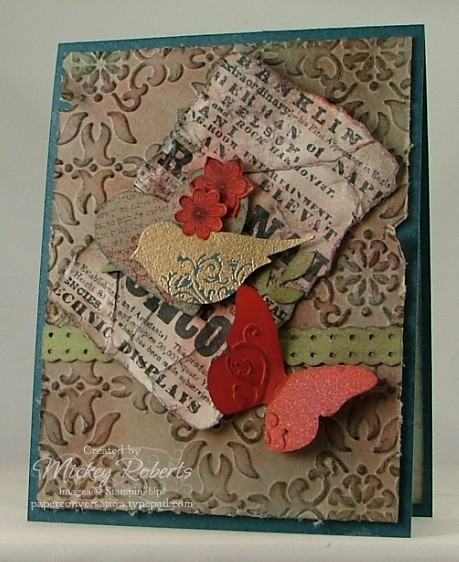 So what's in this card? 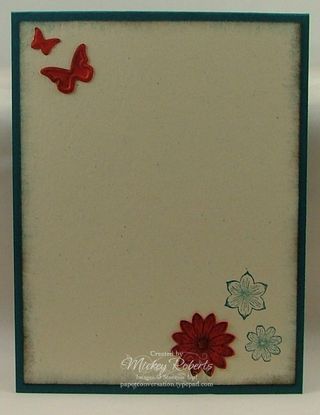 While the Smooch Spritz was drying, I made the liner for the sentiment area inside the card.  For this, I sponged the edges of a piece of Naturals Ivory cardstock with Not Quite Navy and Early Espresso ink.  In the lower right corner, I stamped the three flower image with Not Quite Navy ink and then attached the remaining large size flower punched from the Poppy Parade cardstock over the stamped image with SNAIL.  In the upper left corner, I placed the two smaller butterflies with SNAIL.  I checked the card front to make sure the Smooch Spritz had dried (it only takes a few moments for a light spritz and longer, of course, for a heavier spritz) then added the bird to the heart with a Stampin' Dimensional. The Naturals Ivory envelope was embossed with the Vintage Wallpaper Textured Impressions embossing folder in the Big Shot and then sponged with Not Quite Navy, Poppy Parade, and Early Espresso.

It takes a bit of time to create a Vintage looking card, but the results are always well worth the effort.  To quote my friend, Kimmie:  "I love cards like this (vintage) because it provides the recipient so much detail to admire."  I'm good with that.  Give it a try!

I too like that vintage look. Thanks for showing us a wonderful card and especially for the directions on how to make it.

So sweet and pretty!