Hope you had a great weekend!  Holy cow it was hot!  Even the 88 degree (F) water in the swimming pool felt cool...  But that's Summer in Florida and I'll take it over bone chilling cold any day of the week!

It seems hard to believe that in the midst of all the sunshine and heat I would make a card that was so dark and solemn, but that's the theme of today's project.  I began the design with a "missing you" theme, but somehow the design became heavy and sad so I changed it to a Sympathy card.  I think this happened somewhat sub-consciously because I was following the roller-coaster struggle of a former co-worker whose mother was taken to Heaven unexpectedly. 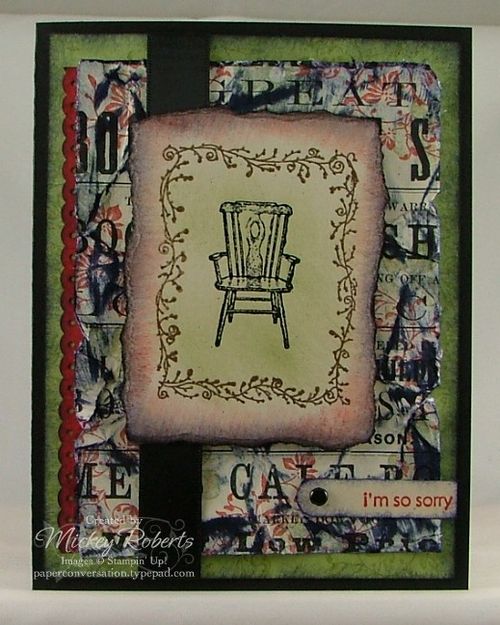 The lonely chair in the focal point comes from the Have A Seat stamp set; new in this years catalog.  I knew that I would be purchasing this stamp set as soon as I saw it because of the chair styles in this stamp set; specifically the Windsor chairs.  My father makes Windsor chairs.  You'll find them at my parent's dining room table and at my father's computer desk.  You'll also see a Windsor Settee (very similar to the one in the stamp set) in their living room.  It's my favorite of all the chairs that he's made.

To create the focal point for this card, a frame from the Matchbox Messages stamp set was stamped with Versamark on Naturals Ivory cardstock and heat embossed with Gold Stampin' Emboss powder.  Inside the frame, the chair was stamped with Basic Black Craft ink and heat embossed with Clear Stampin' Emboss powder. The edges of the cardstock were torn and sponged with Basic Black ink.  The inside of the frame was lightly sponged with Pear Pizzazz ink and the area outside the frame was lightly sponged with Poppy Parade ink.  This piece was adhered to the card front with Stampin' Dimensionals. 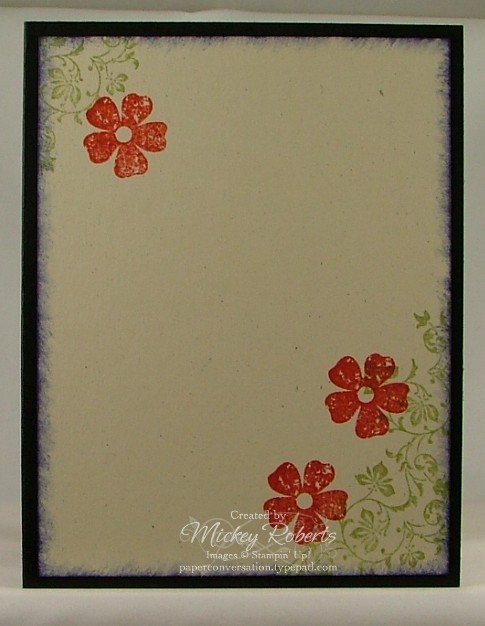 The inside of the card was lined with a piece of Naturals Ivory cardstock.  The loose vine image was stamped in the upper right and lower left corners with Pear Pizzazz and then the small flower image was stamped near the vines with Poppy Parade ink.  The edges of the cardstock were sponged with Basic Black ink. 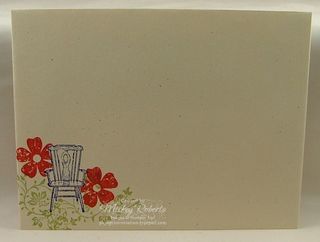 There's a bit of work to making this card, and that's OK.  I think when you're making a Sympathy card it helps that the design is a little time-consuming.  It gives you time to think about the person who has passed, the life that they lived, the lives that they touched, the grief of those they left behind, and the caring you want to convey through the love you put into the card you send.

Mickey, this card is so somber...it speaks volumes, even if you had left off the sentiment. Very well done.

Beautiful card Mickey. I like all the different elements you used and especially how you treated the DSP.