How are you doing?  This week is THE WEEK at Stampin' Up!  It's Convention time in Salt Lake City and thousands of Stampin' Up! Demonstrators are whooping it up at the Salt Palace for a few very busy days and nights of classes, speakers, and demonstrations.  I've been haunting the demonstrator message forums at Stampin' Addicts and so far, it looks like there's lots for them to see and do and oooh and aaah over.  I'm so jealous!  My plan is to be there next year, though...

Today's project is my second swap card for the convention.  I wanted to choose colors that conveyed a feeling of romance and I think that this color combination of Blushing Bride, Pear Pizzazz, and Early Espresso does just that. 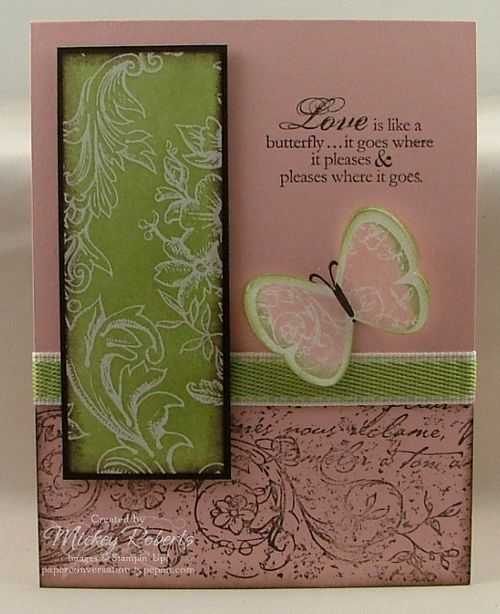 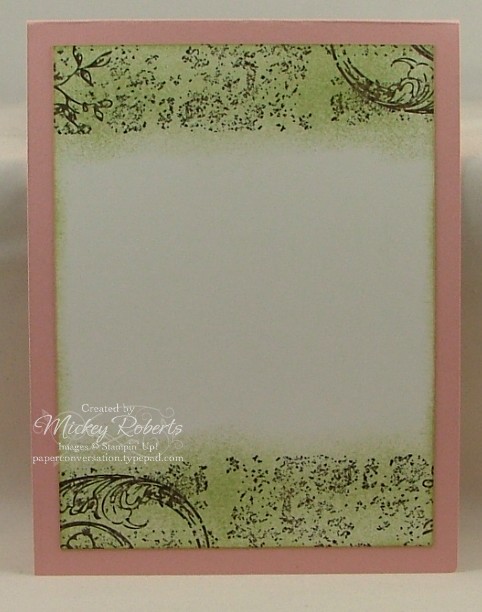 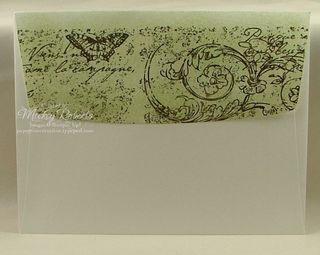 The Very Vintage Jumbo Wheel was inked with Early Espresso one more time and rolled across the envelope flap.  Like the inside of the card, the envelope flap was sponged with Pear Pizzazz ink.

For those who like the look of vintage without all the fuss and extra dimensional elements, this card is sort of a compromise.  I like the clean look of it, but you still get the romantic feel that a vintage card conveys.  I made a few extra of these to set aside for anniversaries, weddings, and engagements.  With so few elements, they were very quick to make.

OK, back to the forums to find out what's going on at Convention.  I hope you'll stop by to visit again soon!

Hi Mickey Just wanted to let you know that the work on your site is beautiful. I notice that you are following the same blogs as I am - Sandi MacIver, Inspiration in Action, PPA, etc. The card you posted on the Stampin Connection is what inspired me to visit your site. Karen

Mickey, this is SO elegant! Pink and green is one of my favorite color combos, and the In Colors are fab for this. GOJUS, as Jan would say! (Meet you in SLC next year, 'K?)

Wish I were at Convention, too, to swap for your gorgeous card.

What a beautiful card...so rich looking! Thank you for sharing your work!

A gorgeous card, Mickey! The wheel is one of my favorites, and it goes beautifully with with the butterfly stamp.
Congratulations for being listed on the blog finds.
Diane

Oh Mickey, this is a beautiful creation! Love all the details, from the outside, to the inside, to the envie. Beautiful!