A Special Wish for my Husband

Hello!  Thanks so much for stopping by to visit!  I hope you're having a wonderful weekend!  I'm looking forward to a busy weekend spent with family and friends.

Today is a special day--it's the 19th Anniversary of the day my husband agreed, officially, to take on a single Mom with three active children.  Combining my three children with his two was problematic at times, but thanks to his sense of humor and my tenacity, we seemed to make it work--most of the time.  Now that all the children are grown and are providing us with some awesome grandchildren, we feel particularly blessed.  He's a pretty special guy and I love him to pieces.  We've weathered some challenges over the years and I think we're closer now than ever.  Needless to say, I felt the need to make him a card that would convey my thoughts and feelings. 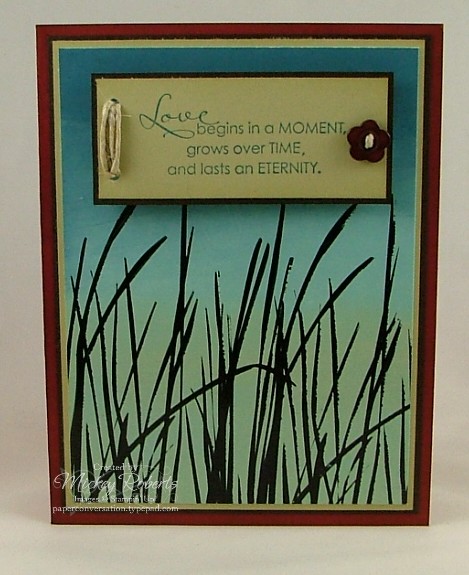 I ended up with a pretty simple card.  I like the simplicity of the art piece so that the importance of the sentiment becomes the focal point.  The grass, from the Inspired by Nature stamp set, was stamped with Jet Black Staz-On onto Glossy White cardstock.  The lower third of the card was brayered with River Rock ink, the middle third with Baja Breeze ink, and the upper third with Not Quite Navy ink.  The Glossy cardstock was matted with a piece of River Rock and a piece of Early Espresso cardstock and then adhered to the Cherry Cobbler card base with SNAIL.  All the edges of these cardstocks were sponged with their corresponding ink colors.

The sentiment, from the Occasional Quotes stamp set (Level 3 Hostess set), was stamped with Not Quite Navy ink on River Rock cardstock and matted with a piece of Early Espresso cardstock.  The edges of these cardstocks were also sponged with their corresponding ink colors.  The Crop-A-Dile was used to punch 1/8" holes into the sentiment piece; one hole on the right edge center and two holes on the left edge, approximately 1/8" from the top and bottom of the River Rock cardstock.  A piece of Hemp Twine was looped through the Chocolate Chip button and the ends dropped through the hole punched on the right side of the sentiment piece.  Then one end of the Hemp Twine was pushed up through one of the holes on the left side and the other end through the second hole on the left side.  The ends were crossed over the top of the sentiment piece and then down the opposite hole.  This is repeated until the holes are pretty much filled up and then the ends are knotted at the back.  Stampin' Dimensionals are used to attach the sentiment piece to the card front (you may have to double stack the Stampin' Dimensionals if the Hemp Twine stack gets too thick on the back of the sentiment piece). 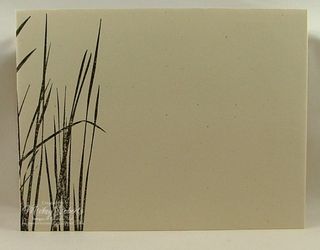 Now I'm off to get ready for a special dinner with my husband.

Mickey, this is a fabulous card! Brayering, great color combos, attention to details, you've done it all! I'm sure he'll love it.
Hope you have a wonderful anniversary!
Diane

This is a stunning card and oh, so masculine. I absolutely love it.

What an awesome masculine card! I love the touch of hemp!

What a beautiful card and lovely sentiment! Congratulations and best wishes to you both! TFS!

Wow, your card is absolutely gorgeous, the brayering loves so natural! Thank you also for sharing your story! my heart skipped a beat reading it! Have a great day! Hugs always! G