A Bright and Cheerful Get Well

Hello!  Thanks so much for stopping by to visit!

I knew it had been a while since I posted, but when I looked at the date of my last post, I was embarrassed!  Holey Shamoley!  I knew I had been busy the last couple of weeks, but...  In any case, I've surfaced and am diving back into the paper.  It feels wonderful!

One of the things I was doing the last few weeks was preparing for the "First Last Launch of [Space Shuttle] Atlantis."  What a beautiful launch!  I watched the launch of STS-132 outside the Launch Control Center.  The wind was blowing in from the ocean and carried the sounds of the launch to us almost immediately.  It was exhilarating to feel the vibrations at nearly the same time that the sound percussion reached us at the Launch Control Center.  OMG!!  We listened to the windows vibrate and flex as we watched Atlantis climb into the bright blue sky.  What an amazing experience!  I've seen so many launches, but I have to say that this one will definitely stand out in my memory. 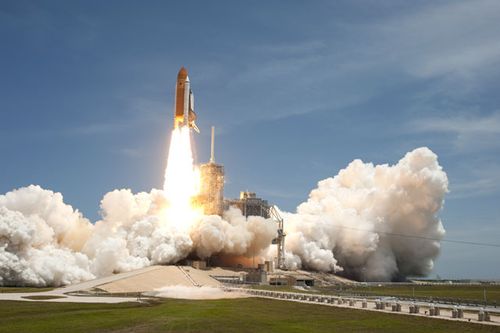 Another project I've been working on is organizing my papercrafting stuff.  And by stuff, I mean STUFF!  It's all rather overwhelming, but it just has to get done.  I've been "working" on it for more than a year, and now the time is running out.  You see, I was established in one room of my house for a few years and am now establishing myself in another room of the house that was fitted with special storage for my papercrafting stuff.  I've been transferring stuff in a rather haphazard way; mostly as I needed the tools or supplies.  It's definitely a good way to figure out what you're using and what's really required.  The thing is, there's still a lot of stuff in the first room.  What to do?  I'm still pondering that as I go through all the boxes and totes and storage carts.  I have a deadline, though; my youngest son and his wife are coming to visit in a few weeks...

Enough of all that stuff.  Let's get back to papercrafting!  Today's project is a bright and cheerful way to say Get Well. 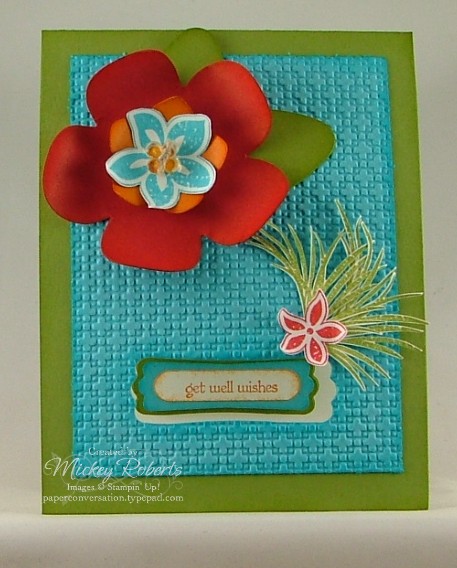 The four-petal flower from the Bitty Bits stamp was stamped on a piece of Whisper White cardstock using Pumpkin Pie ink and punched out with the corresponding punch from the Bitty Shapes Punch Pack.  A small dot of Crystal Effects was placed at the center of the four-petal flower; then the corresponding button from the Bitty Buttons was placed on top of the stamped/punch button and pressed in place.  Once the Crystal Effects was dry, the button holes were pierced and Linen Thread run through the button holes and knotted on top of the button.  The flowers were assembled using Mini Glue Dots.  The large flower was placed in the upper left corner of the card front with a Pop-Up Glue Dot.  The palm fronds are attached near the upper right corner of the punch window with Mini Glue Dots.  The small flower was placed on top of the palm fronds with a Mini Glue Dot. 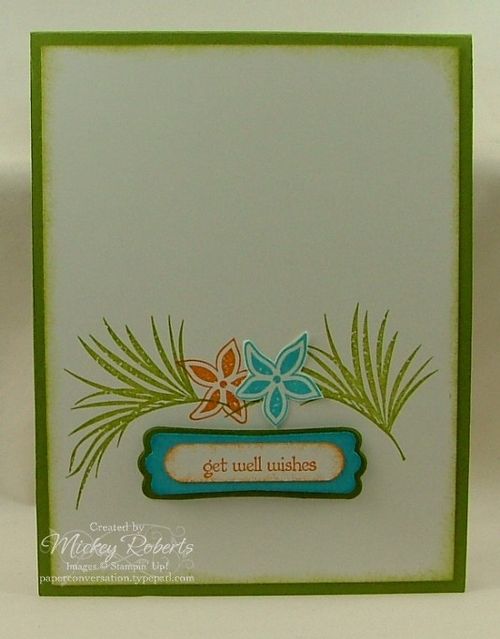 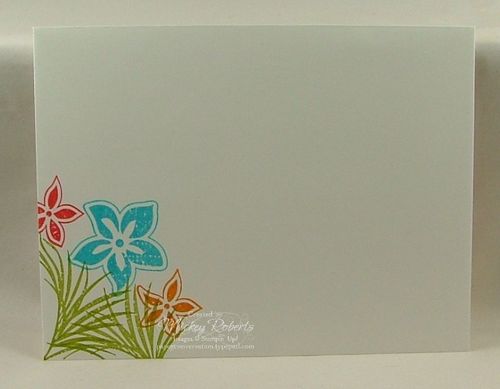 Whew!  There's a bit of work on this card, but well worth the time invested for an eye-catching way to brighten someone's day.

Gorgeous card! I love how you used the punch window!

Love your card -- that sale that Cindy sent the note about may be the answer for all that excess "stuff" -- I know the feeling and we'd love to see photos of your new space and storage options once you have it all spiffy!

Wow, that's some detailed cutting on the first card! The lattice embossing folder looks great with this set.

Whoever gets this really will have their day brightened!! My mom (in Orlando) said the launch was spectacular...fitting for the final flight of a workhorse! Job well done on both projects!