Home Subscribe Shop Events Specials Join My Team Host Contact Me Catalogs
New for 2010
Beautiful Wings (Can Spring be too far away?)

Once I emptied the shipping box from Stampin' Up! with all the goodies I ordered from the Occasions Mini Catalog and from the Sale-A-Bration brochure, I wasn't quite sure where to get started!  So I put all the stamp set boxes back into the shipping box, shook the box, closed my eyes, and picked up a box of stamps.  The winning stamp set is called Vintage Vogue and the coordinating Jumbo Wheel is called Very Vintage.  Here's what I came up with. 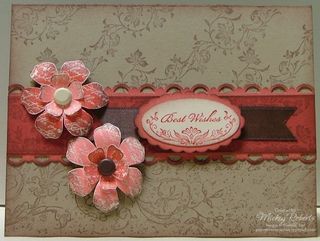 The flowers are stamped on Very Vanilla cardstock with Ruby Red and Cameo Coral; the edges of the stamp (tips of the petals) are then rolled on the Basic Brown stamp pad using a technique called "Rock and Roll."  The flowers are cut out with Paper Snips.  The petals of the larger flower are rolled under and the petals of the small flower are rolled up using a bone folder.  A hole is pierced in the center of the small and large flower and a Very Vanilla (or Chocolate Chip) 5/16" Neutrals brad is inserted.  A Pop-Up Glue Dot is placed on the back of each flower to give it some lift and to allow the lower petals to remain curled.  The flowers are placed on the left side of the card front, straddling the Cameo Coral/Ruby Red cardstock.

Best Wishes (from the Oval All stamp set) is stamped on Very Vanilla cardstock with Cameo Coral ink and punched out with the Large Oval punch.  The edges are sponged in Basic Brown.  The Scallop Oval punch is used to create the bottom layer from a scrap of Cameo Coral cardstock; these edges are sponged with Basic Brown, too.  The Very Vanilla oval is attached to the Cameo Coral scalloped oval with SNAIL.  A couple of Stampin' Dimensionals are placed on the back of the scalloped Cameo Coral oval.  This piece is placed at the center of the Chocolate Chip satin ribbon. 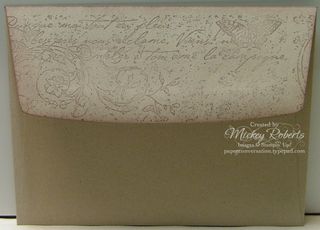 The Very Vintage Jumbo Wheel is rolled over the envelope flap and the edges of the flap are then sponged with Basic Brown.

A very pretty card that can be used for just about any occasion.

Mickey, this is just gorgeous! I love what you did with the envie flap, too. My stuff should arrive Monday....I can't wait!!!!

This is gorgeous! I, too, am in love with this set! Beautiful colors!

So pretty--love the decorated envelope too!

Gorgeous! I love all the little details you added.

I just got this stamp set. I LOVE the flowers on this card.

AMAZING color palette on this card. Thanks so much for posting your blog on Stampin' Connection.

wowza - what a gorgeous card